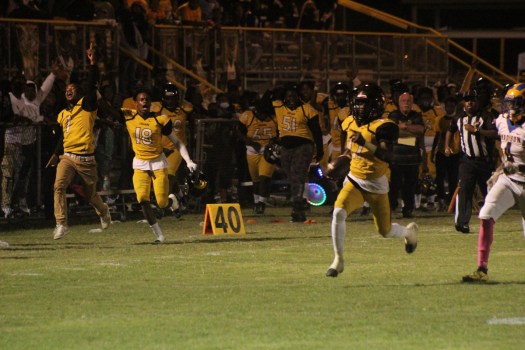 Ferriday running back Jaquarius Davis is a rushing threat for the Trojans. He said the game against Vidalia is like any other game, they have to work hard and be prepared. (Hunter Cloud | The Natchez Democrat) 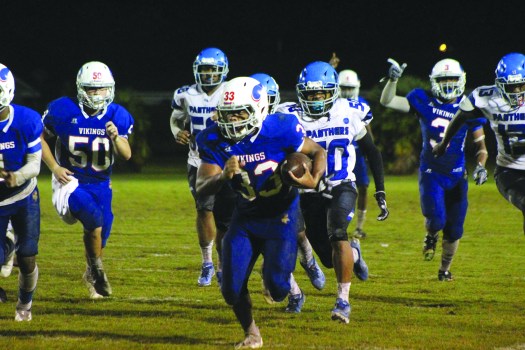 Vidalia’s Nic Banks is a star running back for the Vikings. He said last year’s loss to Ferriday has fueled him everyday in practice. (Hunter Cloud | The Natchez Democrat)

Just moments after Vidalia beat Madison Parish last Friday, head coach Mike Norris said it was Ferriday week. Senior running back Nic Banks said he woke up with a fire in his belly the next day, as Vidalia is looking for revenge after losing 70-0 in 2020

“We are not only rivals but (after) what they did to us last year, we are in for our own game,” Banks said. “It ticks on in my mind. It motivates me each day that I wake up. It sets a fire inside of me to want to come out here and practice harder and harder.”

Senior offensive lineman Gabriel Bourke said the game is personal. “We have to go up there and do our job and win,” Bourke said. “It hurts but you still have to go out there each day and get prepared for this week. Last game of my senior year, it would be pretty good to beat Ferriday. We haven’t beaten them yet.”

Trojan head coach Stanley Smith spoke to his team before they started practice Monday. “This game has to mean something to you,” he said. After a rough start to the season, the Trojans are playing for pride in their final home game of the season.

Jaquarius Davis has put the team on his back and been a leader on and off the field. The senior running back said the game is just a normal game to him, but it means a lot to the community.

“Vidalia has been our rival for years,” Davis said. “We just have to do what we have to do. We have to work Monday through Thursday. Friday we got to play ball. We have been beating them every year but I’m not saying they are going to be easy this year. We still have to work.”

Davis said he has a few relatives who live in Vidalia but they do not play any sports, he said. Preparing for his final home game is hard because time flew by fast, he said.

His teammate Sharone Finister Jr. is preparing for his final home game as a senior for Ferriday. Originally, he moved to Ferriday from Jonesville in 7th grade. He said his biggest memory of the rivalry was in their win last year.

“Last year I had a big game against them,” Finister said. “I ended up getting two interceptions. One of them was a pick-6 so I’m looking forward to it this year. It’s a good feeling especially when you win. During the game all you can think about is all of the people cheering for you. It’s like a homecoming game.”

If Vidalia wins they have a shot of reaching the playoffs. Currently, the Vikings are 34th and need a win to possibly get to 31 or 32, Norris said. The Vikings have to be in the top 32 to make the playoffs so a win would help.

“If we win we have a good shot of making the playoffs,” Bourke said. “If we lose it is pretty much it.”