Carter phenomenal in his comeback season 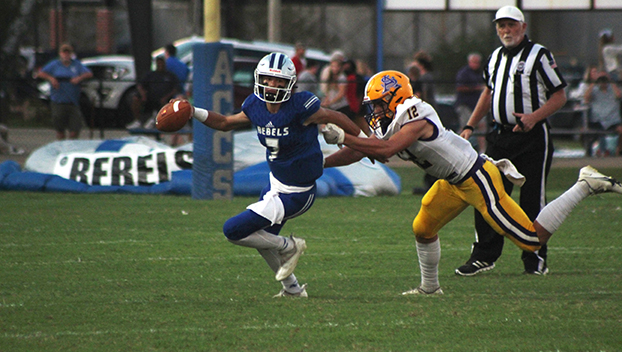 ACCS quarterback Coleman Carter sheds a tackle from a St. Aloysius defender this year. Carter is a freshman quarterback and his athletic ability allows him to be a dual threat with his arm or legs. (Hunter Cloud | The Natchez Democrat)

NATCHEZ — Adams County Christian School quarterback Coleman Carter has put up some impressive stats as a freshman this season. He has 2,375 yards passing and 22 touchdowns this season. With his legs, he has picked up 605 yards and three touchdowns and he had two pick-sixes as a defender.

The Rebels won the district title and entered the second round of the MAIS playoffs against Riverfield under his leadership. He said they have worked hard leading up to this point in the season.

“It feels good we have worked hard in practice and got better each week,” Carter said. “(My ankle) is at 90 percent but I’m still good. If I roll it or anything I just play through it.”

It would be hard to imagine the quarterback on the sideline and out of the field of play. However, Carter missed the last month of his eighth-grade baseball season due to an ankle injury this past spring.

He was running to third when he broke his ankle. ACCS head coach Jake Winston and assistant baseball coach Freeman carried him off the field, and when he tried walking on the ankle before he realized he could not.

“It hurt so bad I did not know what to say,” Carter said. “I thought I was going to be able to come back and play. We went to the doctor that night and they said it was fractured. Monday they came back with x-rays and said it was broken.”

The injury cut short a stellar baseball season for him as he hit .348 with 16 RBIs. Carter said he was frustrated he could not play in the spring football game. He wore a boot for three months, which he said felt like seven years.

From the dugout, Carter supported his team as they made a last ditch effort to make the playoffs. In between innings, Carter would try to long toss with the left fielder as he warmed him up. Assistant coach Mathew Freeman said those moments showed his character .

“He is a true competitor, he would have played if he could have,” Freeman said. “He plays through injuries like if he rolls his ankle. A lot of the times when he should come out of the game he won’t show he is injured. He is a tough athlete for sure.”

A start to football

Until his eighth-grade year, Carter said he cared more about baseball than football. Now, the two are flipped around. He gives credit to Freeman for getting him to enjoy football. Freeman said playing him at quarterback changed how he viewed the game.

During the summer, Carter went to a quarterback coach every Tuesday, he said. Patrick Mahomes is the quarterback he watches the most in the NFL. They have similar playstyles, gunslingers or playmakers who make things happen in the quarterback role.

Freeman said in his time coaching Carter he has seen him grow. His arm strength at first was incredible as he could throw the ball 50 to 60 yards, he said. Not many people thought he could be a quarterback with the lack of experience at the position. Now, he can read the field and make accurate throws, he said.

“He worked really hard the summer before last and carried (the jv team),” Freeman said. “This past summer was when he really geared up for high school football. He has improved so much. He has a big future at quarterback if he keeps working. He is going to grow, get taller and stronger. He can do a lot more stuff than what his body allows him to do now.”