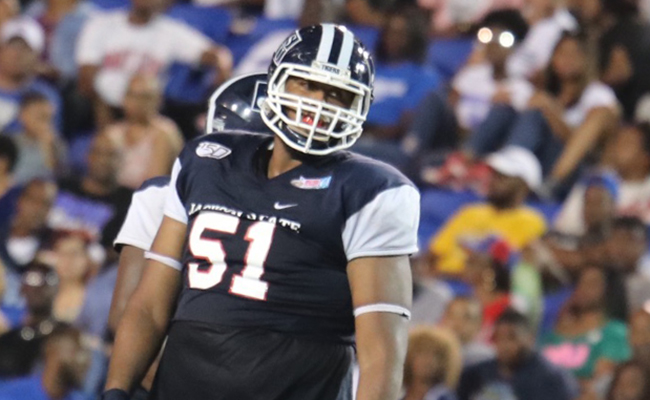 Cedric Dunbar stands on the field during a football game for Jackson State University in 2019. He is now a SWAC champion. (Courtesy Chuck Darbonne)

JACKSON (AP) — Isaiah Bolden returned a kick-off 91 yards and James Houston IV picked off a pass in the backfield and returned it five yards for a score as Jackson State broke open a tight game in the third quarter to beat Prairie View A&M 27-10, and win its first Southwestern Athletic Conference championship in 13 years Saturday.

Jackson State’s defense forced four turnovers from Prairie View quarterback Jawon Pass, picking off three passes and forcing a third-quarter fumble. The graduate transfer from Louisville, who threw for just shy of 2,000 yards, was held to just 6 of 19 for 80 yards.

Prairie View scored first. Ty Holden took a pitch from Pass, pulled up and lobbed a pass to a wide-open Jailon Howard for a 35-yard touchdown with 3:25 left in the first quarter.

Jackson State answered with a six-play, 65-yard drive capped by a 16-yard pass to Malachi Wideman from Shedeur Sanders, the SWAC Freshman of the Year and son of coach Deion Sanders.

Luis Reyes put the Panthers on top with a 37-yard field goal in the second quarter, but Prairie View did not score again.

Bolden took the following kick-off, found a seam and raced 91-yards for the go-ahead touchdown and a 13-10 halftime lead.

The Tigers forced a Pass fumble on Prairie View’s first possession of the second half, and with the Panthers deep in their own territory, Houston penetrated into the backfield, tipping a swing pass, snatching it out of the air and returning it five yards for a touchdown midway through the third quarter.

Jackson State put a bow on its SWAC title with 48-yard drive late in the third quarter capped by a five-yard run from Peytton Pickett, who finished with 107 rushing yards on 19 carries.

With the SWAC title comes a berth in the 2021 Celebration Bowl in Atlanta Dec. 18. The Tigers will face Mid-Eastern Conference champion South Carolina State (6-5).