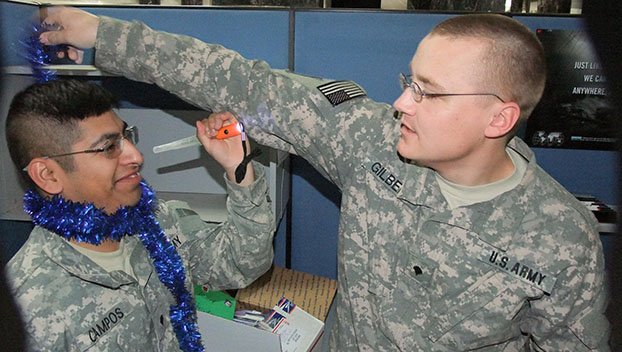 Pattie Reed Jones shared this photo of soldiers opening gift boxes that were sent to them through Operation GRITS.

That is less than usual, Jones said, as inflation seems to have had its toll on the local economy.

Already, Operation GRITS, which stands for “gifts raised in the South,” is gearing up for the next shipment to help soldiers overseas feel a sense of comfort from items that are often harder for them to find on their base.

Around Mardi Gras season, Operation GRITS will be shipping out King Cakes, which is both fun for soldiers who’ve never tasted the purely southern dessert and also like a “taste of home” for those that have, Jones said.

“Mainly we need donations to help offset the cost of shipping,” Jones said. “We’ll be gearing up soon for ‘Taste of Home’ in the spring, where we send out King Cakes for Mardi Gras. On Friday we sent out between 200 and 300 boxes and that’s down from the number we’ve sent out in previous years. Everyone thinks that soldiers aren’t ‘over there’ anymore but they are and the economy being what it is has had an effect.”

Jones said it takes approximately $15,000 each year to fill the boxes and ship them. Seeing the looks on soldiers’ faces in photographs they send back on social media is worth every penny, she said.

“I love seeing the pictures that come back to us,” Jones said.

Equally rewarding is the feeling of doing something nice for someone else, she said.

“One of the things I love is seeing pictures of couples shop for items to put in the boxes with their children and thinking about giving to someone who has given us so much for the freedom and safety we have. They are thinking about someone other than themselves at Christmastime. They love to show me what they’ve done.”

Jones said Operation GRITS started in 2010 from a mistake. She had the idea to mail out just a few Christmas boxes to her friends. When she meant to order 10 boxes from USPS, she accidentally ordered 10 cases of 25 boxes each. Realizing there was no existing charity that sends Christmas boxes to soldiers, Jones had the idea to start up an organized group to take up donations, stuff all of the boxes and ship them. Operation GRITS was born.

This time of year, Operation GRITS needs monetary support to make up for shipping costs.

All monetary donations are tax-deductible, she said. Jones said Operations GRITS will also take up donations of other items right up until the Christmas boxes are shipped next year.

“We take donations right up until we ship and take them all year long,” she said.

Operation GRITS takes donations of any personal hygiene, snack and comfort items that “travel well,” such as beef jerky, lip balm and wet wipes, Jones said. GRITS also encourages handwritten cards and notes with the donors’ return address so that soldiers have someone to communicate with and thank for the gifts.

Those who would like to help pack, label and ship the boxes can also contact Jones ahead of time and she will let them know when the packing party begins.

“We sometimes have more help than we need,” she said.

Donations can be dropped off or mailed to Reed Insurance agency at 107 Carter St., Vidalia LA.

A donations link and more information can also be found online at operationgrits.com.