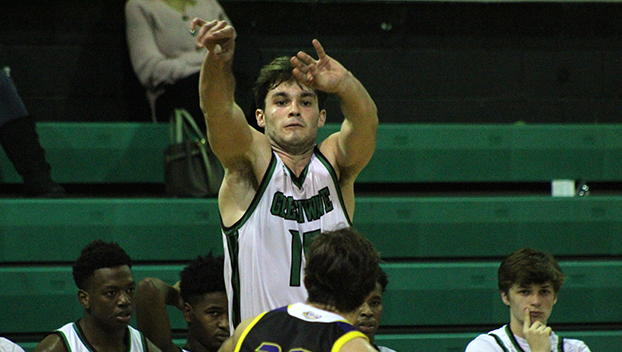 Mason Moore makes a pass inside to a teammate against Centreville Academy Tuesday night. Moore scored 17 points for the Green Wave in their 73-42 win. (Hunter Cloud | The Natchez Democrat)

NATCHEZ — Cathedral hoops closed out the first half of the season with wins over Centreville Academy Tuesday evening. Green Wave beat the Tigers 73-42, and the Lady Wave won their game 46-36.

Centreville led the first quarter of the boys’ game and was up 19-12 when the second quarter started. However, Cathedral rallied to take a 33-26 lead.

Green Wave guard Mason Moore said head coach Taylor Strahan asked the team to get its head in the game between the first and second quarters. They responded and played with intensity.

“Our intensity and effort changed. It is the formula for us,” Strahan said. “When we turn it on it’s how we can play. I hope to carry the momentum on. It would be nice to get some practices in over the break. The effort is a lot of buying in. We have to buy in, and when we do, it translates.”

Cathedral scored 40 points in the second half to distance itself from the Tigers, who scored 16 points. Moore, who finished with 17 points, said they moved the ball inside more in the second half. It gave everyone a better chance of getting open.

Moore is a shooting specialist. He knocked down four threes in the game and several long-range jump shots. The Green Wave guard has played basketball at Cathedral since AYA ball in 3rd grade. Back then, he said he was good at shooting the ball like he was Tuesday night.

“I felt good just doing what I do best, shooting threes,” Moore said. “It takes me the first period to dial in my shot. My teammates are the key to getting me open. They know where I go. I usually catch and shoot.”

The win brought the first half of the season to an end. It was a positive note for the Green Wave as they have a good mindset heading into Christmas Break practices.

All season, the Green Wave basketball team has not practiced two days in a row, Strahan said. He is looking forward to the possibility of squeezing in five practices from Dec. 26-31.

Those practices will allow the team to learn and grow. Cathedral is playing the right way, but they have to learn every possession, rebound, or free throw is important, he said.

Green Wave hoops will take on Jackson Prep, Madison-Ridgeland Academy, and district teams in the second half of the season. Unlike the first half, it is not interrupted by Christmas and Thanksgiving breaks.

“It is where we will see what we are made of,” Strahan said.

Cathedral played a good game and stayed focused in their win over Centerville Tuesday night. Head coach Bernita Dunbar was proud of her team for their effort.

Lauren Dunbar had a double-double with 11 points and 11 rebounds. Marlie Hargon scored four points and forced two steals, and Maddie Verruchi had seven points, a steal, an assist, and a rebound.

Cathedral scored 17 points in the second half after adjustments had to be made. Verruchi got into foul trouble and caused a shift in the lineup.

“I had to adjust my offense,” Dunbar said. “When you take players out of their normal position, it won’t go as well as it should.”

Centreville was led by Savanah Hailey, who scored 31 points for the Lady Tigers. Dunbar said she is a great scorer and a great athlete.

Over the Christmas Break, the Lady Wave will spend time in the gym practicing. Cathedral will improve their shooting, positioning and playing as one unit, she said.

“I see us growing and working to the district part of the season,” Dunbar said. ” Seeing these girls grow as young women, I feel really good about my team.”