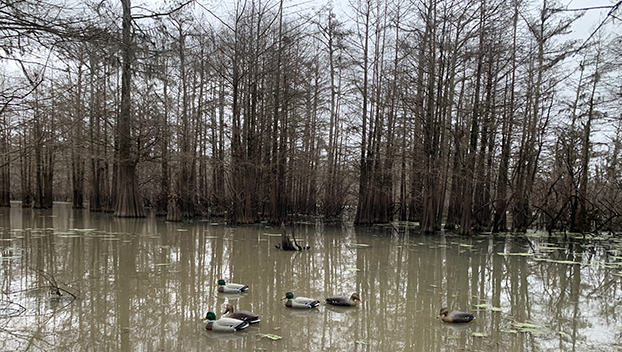 Silhouettes of Cypress trees rise from the muddy waters of Gillard lake at St. Catherine Creek National Wildlife Refuge. Clouds block out the stars and moonlight as hunters wait for shooting hours. Time slowly moves the closer you get to daylight it seems.

Duck decoys hitting the lake’s surface and sloshing water from wading duck hunters breaks up the hum of crickets. “It’s January 2nd, and I’m soaked in sweat.” A hunter complains to his buddies 90-yards to the left of me. The hunters are Kaleb, Cameron, Jonas, and Alek I would learn.

An hour before sunrise, decoys become visible, and the wetlands drop into silence. The chambering of shotgun shells breaks this silence at about 6:35 a.m. before a group in the distance opens the morning with a thunderous volley of birdshot.

Quacks, feeding chuckles, and greeting calls begin to call out from the timber to draw in ducks, but few come. One group of about eight mallards turns into an opening to land. They were greeted by four guns blazing. A duck falls with a thud against the base of a Balding Cypress tree before a sharp whistle pierces the air, and a black retriever named Polly jumps into the water and returns with a drake in its mouth.

Hours pass quickly with no birds flying. It is 11 a.m. in the blink of an eye as decoys are picked up and placed in their bags, and guns are unloaded. They are placed in a Gatortail boat as Cameron tries desperately to get his motor cranked. His battery is dead, and it won’t start.

“We could use the Remington pump as a paddle,” one quipped.

Only one solution would work, the boat had to be waded 657-yards to the boat launch. Two men took each side, and one stayed in the boat to steer. We went 175-yards before coming across another group of hunters picking up their decoys. Water was getting closer and closer to the top of chest waders as the lake grew deeper.

Fortunately, a man with camo face paint and a bearded man asked if we had a rope. They began towing the boat the rest of the 657-yards to the boat launch.

“How often do you come out here,” one asks me as we get closer to the launch.

It was only my second time on the lake, I told them. It was also the second time I have ever gone duck hunting. I waded back into the water to push the boat onto a trailer.

“Hey, I still didn’t have to walk back,” I said, grateful I did not have to cross the slough filled with thick mud and cypress knees. Those knees hidden by water are prone to trip someone carrying a Springfield Model-67D 12-gauge shotgun and a bag of 20 decoys.

More than anything, I was grateful to the hunters who towed us back because they didn’t have to. I’m thankful for the group of buddies from South Louisiana who managed to crack jokes in the face of frustrating events. I hope I get a chance to hunt with them again because it was the most fun I have ever had hunting.

Sunday’s hunt was slow but filled with enjoyment.

As disappointing as it is to not take a limit of ducks, the most disappointing news came after the hunt. One of the hunters dropped his wallet next to the road at the Gillard Lake Boat Launch, and $500 was missing from it.