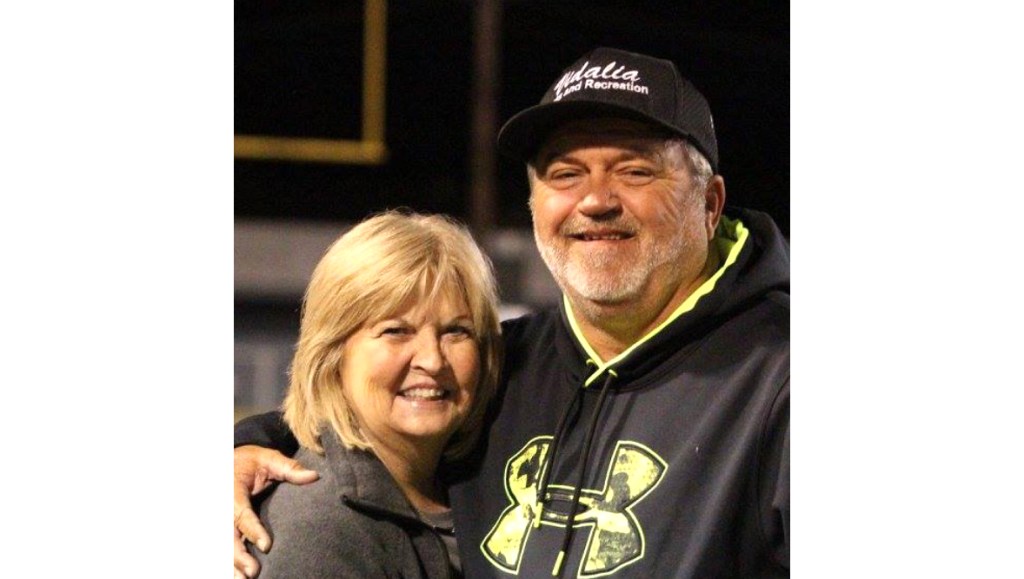 Former Vidalia head coach Johnny Lee Hoffpauir, right, and his wife Pam Hoffpauir. Johnny will be inducted into the Louisiana Baseball Coaches Association Hall of Fame on Jan. 14 in Lafayette. He was a member of the 2020 class but due to COVID he had to wait for the ceremony. He said if they had a hall of fame for coaches wives his wife Pam should be in it. (Submitted Photo)

VIDALIA — Former longtime Vidalia High School head baseball coach Johnny Lee Hoffpaiur finally will be inducted into the Louisiana Baseball Coaches Association Hall of Fame as a member of the Class of 2021.

The Hall of Fame Banquet, which will honor both the Class of 2021 and the Class of 2022, will take place on Friday, Jan. 14, at 7 p.m. in Lafayette, La. Among those who will also be inducted that night include former LSU head coaches Skip Bertman, who led the Tigers to five national championships between 1991 and 2002, and recently-retired Paul Manieri, who coached them to the 2009 national title.

“I was voted in last year, but COVID hit. The banquet they were scheduled to have was shut down,” said Hoffpauir, who now lives in Hattiesburg. “When I found out about it last year, I was at a loss for words. It’s a very big honor, especially when you’re voted in by your peers, your coaches. Skip Bertman is being inducted. Paul Manieri is going this year. Rick Jones from Tulane, Several high school coaches. It’s a big honor to be on that list.”

Hoffpaiur coached a total of 36 years between football and baseball. He said that Vidalia High School had baseball in the 1950s, but that sport did not return to the school until he started it back up in 1979. He coached the Vikings from that year all the way to 2010. He said he got out of coaching and teaching that year and has spent most of the last 11 years first building the new Concordia District 3 Recreation Complex just west of Vidalia and then being the director of the complex.

Hoffpauir had an amazing 31-year run as head coach of the Vikings with 579 wins and just 230 losses. The Vikings won the state championship in 1996 and were state runner-up in 2002. They made it to the semifinals five different times and the quarterfinals several times.

“One of our accomplishments in 2002 was we finished the regular season at 27-0. That’s unheard of,” Hoffpauir said. “We only missed the playoffs three times and had only two losing seasons.”

During those years, Vidalia sent 38 players on to play college baseball and sent three players to play professional baseball, which Hoffpauir said was “very proud of.”

“Three kids were named Most Valuable Player in the state of Louisiana – Joff Hoffpauir in 1996 in Class 2A, Jarrett Hoffpauir in 2001, and Barry Bowden, who won it in 2002 and 2003 in Class 2A,” Hoffpauir said. “Jarrett made it all the way to the big leagues (Major League Baseball). Josh Hoffpauir made it to AAA and went to spring training with the big leagues. He got a taste of it. Barry made it AA.”

Johnny Lee Hoffpauir was named Coach of the Year in the state of Louisiana two times, first in 1996 and then in 2002. He was also named head coach of the East All-Star Game in 1997.

As for how many district championships Vidalia won, Hoffpaiur simply said, “A lot.”

When asked what was the best memory of his coaching career, Hoffpauir said he had so many of them. He then said the top highlight was winning the state championship in 1996.

“We did all this before they were split into public and private schools. So, it was so much tougher back team. Beating Kinder 5-3 in eight innings to win it all,” Hoffpauir said.

He added, “One of the things that I was most proud of was beating teams that we weren’t supposed to beat. Beating the bigger teams. All the rivalries we had with Cathedral, some of the other schools is unforgettable.”

Hoffpaiur added that Vidalia had so many great games against Cathedral and legendary head coach Ken Beesley Sr. Then near the end of Hoffpaiur’s career in the late 2000s, when the Vikings took on the Green Wave, Craig Beesley took over as head baseball coach at Cathedral.

“Even in the losses, we came so close so many times.,” Hoffpauir said. “I’ll never forget the kids that played for us. They’re the ones who made this honor possible.”

“We went from just having a baseball team to having a baseball program. There’s a huge difference in that,” Hoffpaiur said. “When you have a program, kids are looking forward to that. We didn’t recruit. We got the kids from Vidalia, Louisiana and built our program.

“We couldn’t have done what we did without the kids of Vidalia,” he continued. “They did what they needed to do to be a player for the Vidalia Vikings. I want to thank every kid that played for Vidalia.

Hoffpauir also he couldn’t have done what he did for just over three decades without the support of his wife, Pam Hoffpauir.

“If they ever make a Hall of Fame for coaches’ wives, Pam should be the first one inducted,” Johnny Lee said. “I had some good assistant coaches I’m thankful for. Our fans. We had the best fans in the world, especially when the playoffs started. We were hard to beat at home. They had a lot to do with that.”

He then stated, “It’s an honor that I share with a lot of people. Without them, none of this would matter. I’m honored to be chosen and humble. I’m humbled for that. We had a special bond with the kids at Vidalia.”

Monterey hits the ground running in return from break,…