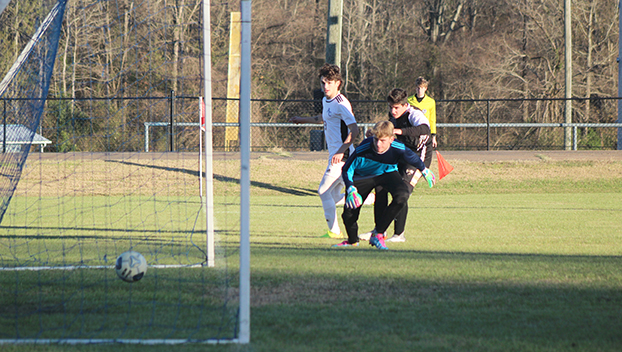 Alex Patterson watches as his shot sneaks by the Oak Forest goalkeeper into the goal in the Rebels 6-2 win Tuesday afternoon. (Hunter Cloud | The Natchez Democrat)

Head coach Chris Hughes was proud of his team for the way they played. They had been mercy ruled in games against Bayou Academy and Copiah Academy last week.

Oak Forest opened the scoring on a corner kick. As goalkeeper Brody Watts came out to catch the ball, defenders didn’t communicate and clear the cross and Oak Forest put it away.

“I was like it’s about to be some more of the same. They are regrouped and got on the same page,” Hughes said. “They are doing what they are supposed to do they are having fun and tonight it paid off.”

The Rebels win was in a huge part thanks to a striker partnership between Patterson and Merriett. They have played soccer together for a while.

Merriett said when they are playing together in the attacking third he could depend on him. They strung beautiful one-two passes to create goal-scoring opportunities and put AC up 5-1 at halftime.

He scored on a volley right before the half to secure a hat trick, his second. It helped the team get a much-needed win after losing several veteran players.

“I didn’t think I scored on the volley. I guess the net had a hole in the back of it because I saw the ball roll out,” Merriett said. “We needed a win like this. We have had some players decide not to play. We had some young guys step up. I was proud of our team.”

Those youngsters stepping up were Drake Hale and Hart Smith who both Merriett and Loy credited with playing great on the defensive backline. They are both players who hadn’t received a lot of varsity playing time but stepped up when called upon.

Loy scored the best goal of the game when he placed a 40-yard free-kick just above the outstretched fingertips of the Yellow Jackets goalie. The free-kick prior he had a tougher angle and put the ball over the goal.

His teammates greeted him at midfield to celebrate his second goal of the season. He felt emotion after he scored.

“It reminded me how much I love playing this sport because of those moments,” Loy said.

He has stepped up on the team into a strong center defensive midfielder role. AC is stronger defensively when he plays that position. He has confidence in the defensive backline too.

AC’s win gives them confidence after a rough start to the district schedule. Loy said the team knew it had to win against Oak Forest.

“The team knew what we had to do. We were tired of losing,” Loy said. “I feel like with this win it gives us more confidence about the next games we have left we will go with it and see.”