Bowling Betty: Friends mourns loss of resident who bowled for 50-plus years 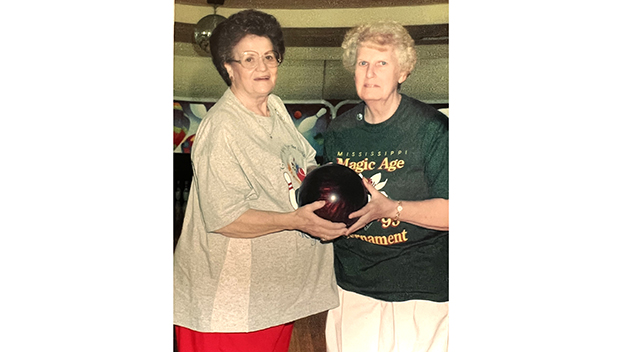 Helen Hedglin and Betty Daily bowled together for 20 years, as did Carol Tomko and Jill Thomas (not pictured). The women reflected this week on the passing of Daily. (Submitted Photo)

NATCHEZ — Natchez resident Betty Daily was a bowler for more than 50 years and bowled in the Magic Age tournament in Laurel this October before her death last week, her daughter Sandra Parker said.

She first bowled in Ferriday at the Dixie Lane Bowling Alley before going to Rivergate Bowl in Natchez, now called Bluff City Bowl.

Daily was a member of the Women’s City Bowling Board in Natchez for a number of years, her friend Carol Tomko said. They first started bowling together in 1998 when Tomko first moved to Ferriday. For 20 years, they bowled twice a week until Tomko moved to Oregon in 2019.

Daily used a 10 pound ball which she rolled slowly. The average roll speed for her age group was 12 mph, Tomko said. Jill Thomas, who started bowling with Daily in 1996, said she could roll the ball at about 4.6 mph. She could still bowl strikes by hitting the pocket and each pin would fall like dominoes. The No. 2 would hit the No. 5 and then the No. 3 and soon she had a strike.

“She could out bowl us and had the patience to roll the ball that slow,” Thomas said. “Our favorite thing was watching her roll the ball as slow as it would go. She was bowling with a plastic ball while we used balls that were like $200. When she got a strike we sat there like ‘what the hell?’ It was the most mystical thing. I even tried rolling it that way but I couldn’t get my ball to roll that slow.”

Everytime she bowled with Daily it was a positive experience, Tomko said. It didn’t matter if she bowled well or not. She could lose multiple games in a row and not be bothered by it.

Tomko said she was always positive and people enjoyed being around her. On those trips to nationals they would go sightseeing and her positive attitude carried over into those adventures.

“We went to Detroit for a national tournament and wanted to see the Henry Ford Museum. I think it was outdoors. At the time she had a bad hip and knee and couldn’t keep up. She told us to go on and enjoy ourselves and read a book as she waited for us to come back. It was who she was,” Tomko said. “In Reno, we went up to the mountains and Lake Tahoe. We sailed around the lake. In the mountains, we were thrilled to death to get out of the car and play in the snow for a little bit. They were all 70 at the time. It was hysterical. We bowled and enjoyed each other’s company.”

Thomas said Daily was a special and thoughtful lady and was very caring outside of the bowling alley.

On the Detroit trip, the group made a pit stop to visit Tomko’s daughter in Avon Lake, Ohio. Her grandson Andrew had just been born and Daily immediately took him and held him on the couch. She was in heaven with that baby, Tomko said.

Daily took in younger bowlers like Paige Bowser. They bowled together for a year and a half which was filled with growth. Paige said she took bowling seriously and wanted them to do well. Outside of bowling, she taught her about plants and how to plant the seeds and replant them. She had a wealth of knowledge, Bowser said.

The year they bowled together, Daily had a rough time but she kept a positive attitude.

“She would say ‘you are improving and I’m still alive’,” Bowser said.

One of the lessons she taught Bowser was the importance of doing your job no matter what. In the year they bowled together, Daily struggled with her energy levels, she said. It would take her some time to stand up and walk to the lane to bowl. She would still try her best no matter what.

Despite her age, she was kind of savvy with technology and asked Bowswer to record her bowling in case she got a strike. The video would then be put on Facebook. After moving away from Natchez, Bowser said they stayed in touch on Facebook.

Now, she has a jewelry box with patches and pins she received from Daily for making improvements. It is one way she will keep her memory alive.

“Some of the older people who bowl have old traditions like giving pins for reaching certain milestones. Mrs. Betty would always find something in her tool kit to bring to me,” Bowser said. “It was neat she included me in the old school tradition. It meant a lot to me that she tried to keep those traditions alive. I hope in 40 years I can wear them on a jacket and hand them out to younger women who I am bowling with.”

Nov. 3, 2021 was the last time Thomas bowled with Daily. Her husband broke his hip and she went to see him in the hospital missing bowling on that Thursday night. She was not doing well either. By Thanksgiving, she went to the hospital and had a collapsed lung and they found a tumor on her lungs and kidneys. She passed away last Saturday.

“She is missed. We have one other lady at the bowling alley who is 92 and she bowls every once in a while. Betty is one of the last who was at the bowling center,” Thomas said. “We have to keep our heads up and remember her while we are bowling fast balls. She would be getting a strike with a slow roll. She never gave up when the rest of us did.”