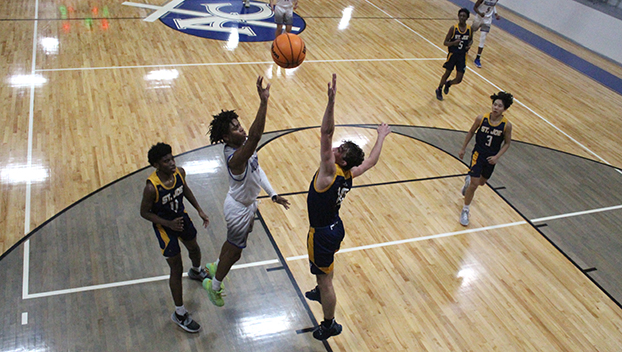 Tiqi Griffin had a great game against Madison St. Joseph last week and stuck true to form against Silliman Institute Monday night. Griffin led the Rebels in scoring with 18 points against the Wildcats as they won 59-47. (File Photo | The Natchez Democrat)

Head coach Matthew Freeman said he preaches limiting opponents to one-shot opportunities. If they can do that and execute well on offense, they can win any game they play. The game plan worked against the Wildcats like it has all season.

“It’s the fourth game in a row where we held the opponents to single digits,” Freeman said. “I’m preaching single digits every quarter, and we will win the game. The defensive intensity led to fastbreak layups tonight, and we made a good bit of our free throws.”

At the beginning of the season, Freeman said he was concerned about his team’s ability to shoot free throws. Against Silliman, they showed improvement from the charity stripe but still have a ways to go.

“In practice, you have to get them worn down. I always yell free throws at the end of high explosive drills to make it as game-like as I can,” Freeman said. “Although, you don’t have fans in the bleachers, which can jack you up when shooting free throws.”

ACCS plays host to Central Hinds Tuesday night and will travel across town to face Cathedral Thursday night. The Rebels got the best of Taylor Strahan’s squad when they last met on the hardwood.

It was an intense environment when the schools played in December, and Freeman expects it to be intense Thursday.

“I am looking for us to handle the environment well,” Freeman said. “Both teams are battling COVID issues. Who knows who will be on the court, honestly. We had two starters out with COVID today.”