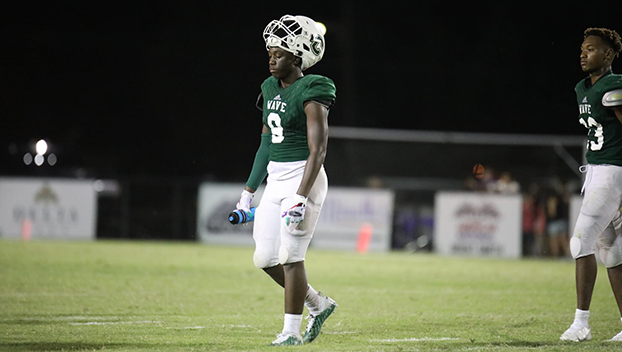 Cathedral football player Jordan Herrington will be remembered more for the things he did off of the football field than on it. He died in a car wreck last weekend and was a sophomore at the school. (Jody Upton | Green Wave Athletics)

NATCHEZ — Cathedral football player Jordan Herrington will be remembered for more than what he did between the lines at Deveraux Stadium on Friday nights, as his positive attitude and smile transcended the game of football.

Herrington, who died Jan. 15 as a result of injuries sustained in a car accident, was a member of the Green Wave for a  year and a half.

“He touched everybody in a positive way throughout the school. You could see it through all the testimonies kids gave at the services we had at the school,” said head coach Chuck Darbonne. “(The football team) have been able to meet in smaller groups. Since football is not happening right now, it’s more about the school and the support for them. I want to be there for the kids at the school.”

Darbonne, who has been a head coach since 2005, said Herrington is the first player he has coached who died while still in high school.

No one plans for it, or can, he said.

“It doesn’t get any easier any time it happens. As a leader of young men, nothing prepares you for this situation,” Darbonne said. “I just want to be there for all of our students as an outlet. I want to be there to listen and talk them through it. We want to enjoy the good times we had with Jordan over the last year and a half.”

Defensive line coach Kurt Russ worked with Herrington closely over the past year as he split time between playing tight end and defensive end. Russ said Herrington always wanted to be on the football field and worked hard. Russ said he grew as a defensive end from the first game to the last.

Russ is a cafeteria manager at Cathedral and saw him everyday at lunch. Herrington would come through his line with a big smile and ask how he was doing. These days, kids don’t always do that, Russ said.

“Jordan was one of those great kids. Always seemed to be happy. He was a good hearted human being,” Russ said. “One of the big attributes to his legacy will be when we had a memorial service for him. Afterwards, there were a few of us who were asked to hang out in the classrooms to talk to anyone. There were a few kids who came up who did not have many friends. They were really worried about what would happen now since Jordan is gone. He was always nice to them. He was the same whether you were the coolest kid on campus or not.”

Russ asks his football players to stand up for any kids who are picked on or bullied, Herrington would do just that. Russ would sometimes watch him befriend others in the cafeteria and eat lunch with them.”

Darbonne said as an athlete, Herrington was coming into his own. On the field he showed no fear and pushed himself. Off the field, he physically challenged himself in the weight room. His attitude motivated other players to become a better version of themselves.

Darbonne said he was a kid who gave 110% effort and would apologize if he had a bad day in practice. At 15, he was a leader other players looked up to and coaches looked forward to coaching everyday.

“We are going to miss him. He was truly an inspirational kid,” Darbonne said.