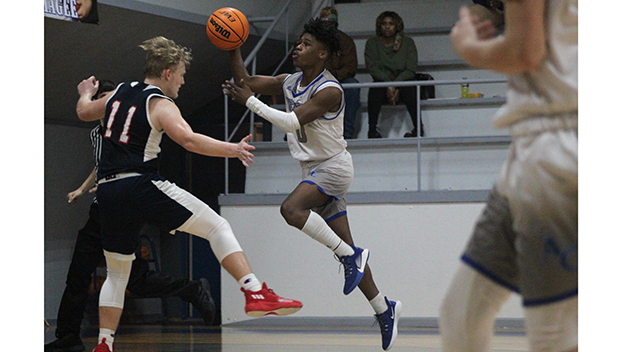 Royale Shelvy drives to the hoop for the Rebels. He was one of 11 players to score for ACCS in theri 55-37 win over Amite School Center Monday night. (Hunter Cloud | The Natchez Democrat)

ACCS Head Coach Matthew Freeman started five different players from his bench in a district game against Amite School Center Monday night. He wanted to give the younger players, who attend every practice, a chance to have their name called out beneath the flashing lights.

They received more than a chance at having their name called. In total, 11 Rebels scored in AC’s 55-37 win. With the game in control, Freeman put in his bench players and let them gain some needed experience. They have a JV District Tournament this Saturday, and several of the bench players will play in the district tournament.

“It’s good to get your younger guys some playing time because you can’t simulate it in practice,” Freeman said. “They got to play against some high school kids, and it should help them with the district tournament. Our game Thursday will determine our seeding for Saturday.”

Amite School Center hung in the game for a quarter as they trailed by just 8-6 after eight minutes of play. However, ACCS pulled away with a 21-7 second quarter to lead 29-13, and they would never look back. Freeman said his team was still sluggish in the game despite the margin of victory.

“We played the whole game slow and sluggish,” Freeman said. “There were distractions outside of the game, and it bled over into the game.”