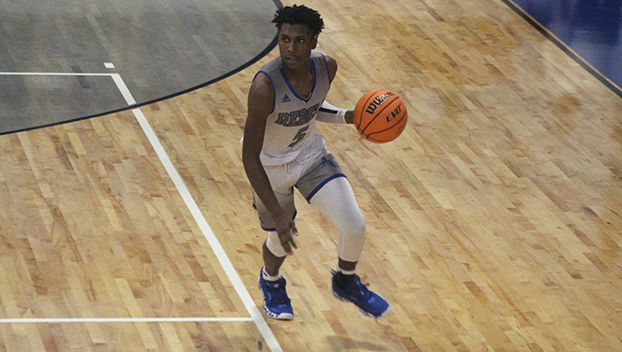 Adams County Christian School’s DK McGruder is one of the offensive threats for the Rebels. (Hunter Cloud | The Natchez Democrat)

Two other ACCS seniors also stepped up big time for the Rebels on their Senior Night. DK McGruder had a double-double with 11 points and 17 rebounds while Kyron Barnes contributed with 10 points.

As has been the case in recent weeks, ACCS held yet another opponent to single-digit scoring in the first quarter. St. Aloysius was the latest victim to have that happen to them as the Flashes scored nine points while the Rebels put up 24 points.

The Rebels scored twice as many points as the Flashes did in the second quarter, 16-8, and took a 40-17 lead into halftime.

The second half was pretty much more of the same as ACCS had its way with St. Aloysius on both ends of the court. The Rebels outscored the Flashes 26-12 in the third quarter and 10-2 in the fourth quarter.

With the win, ACCS improved to 21-4 overall and 9-0 in District 3-5A. The Rebels traveled to Madison to take on district foe St. Joe Madison at 7:30 p.m. Thursday in a very important game for both the Rebels and the Bruins.

ACCS will be the No. 1 seed with a win as the Rebels would finish at 10-0 in district play. If St. Joe Madison wins, it will probably have to win by a certain number of points to claim that No. 1 seed.

NATCHEZ — The Adams County Christian School Lady Rebels ended a long losing streak with a 42-41 win on Senior Night over the St. Aloysius High School Lady Flashes in an MAIS District 3-5A game last Tuesday night. Maddie Campbell led the Rebels in scoring with 19 points and Georgia Martin and McKenzie Campbell scored 9 points each in the contest.

ACCS (5-16, 2-7) played at St. Joe Madison Thursday at 6 p.m. in the Lady Rebels’ district and regular-season finale. Even if the Lady Rebels come out victorious, they will still be the No. 5 seed for next week’s District 3-5A Tournament.

“A win would be big. Even if we don’t win, confidence-wise, just staying in the game with them would be a huge boost for us going into the district tournament,” Rebels head coach Richy Spears said.