Loss of an icon: Bobby Marks leaves behind champion legacy, life of friendship 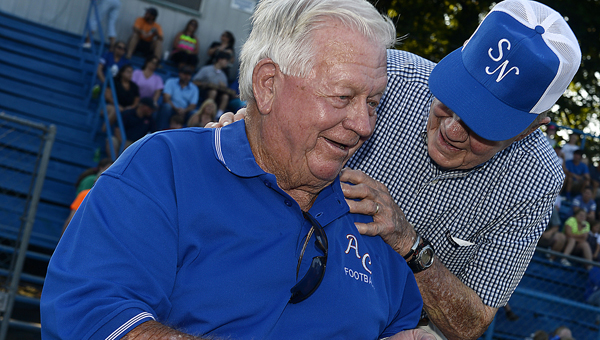 Former Adams County Christian School coach Bobby Marks, left, is greeted by former South Natchez head coach Ed Reed after being honored by a crowd during the Night of Champions during a football game in 2015. (Natchez Democrat file photo)

Former player Kelly Elveston, who was among several former players who lived near Marks in the Lake St. John Community, shared the sadness many felt.

“When I found out he passed, I felt sadness and heartache. He was 88. I know he is in a better place now,” Elveston said. “I still picture him at 58 or whatever he would have been when he was coaching us. He was an energetic, all-business guy.”

In 1982, Marks coached the Adams County Christian School Rebels to a 12-0 record and won the state championship. Former players Whest Shirley and Elveston said he was all business as a football coach.

Elveston said he learned the value of preparation from Marks. He taught the key to success was preparation. It was something Elveston found applicable to life after football.

“He was intense, and he expected you to match his intensity,” Elveston said. “His favorite saying was ‘Three yards and a cloud of dust,’ he was happy if that was all you could give.”

Winning the state title in 1982 was a memory Elveston and Shirley will cherish. Founded in 1970, Adams County Christian School, Marks took them to their first state title. The Rebels would not win another one until head coach David King and his staff won it in 2018. Elveston said he remembers the emotions he felt in 1982.

“It was unbelievable,” Elveston said. “We were just a little ol’ school from Natchez and a bunch of country boys who loved playing football. It was indescribable.”

King, who played at AC under Marks and coached at Trinity before taking the head coaching job at ACCS, said Marks was one of a kind.

“He was a character and a players coach,” King said. “We had fun playing for him. I enjoyed our friendship. He was always in a good mood and had a way of making you feel special. He was a big personality that will be missed. I loved him.”

Marks played fullback and linebacker at Ferriday High School under Red Robinson. After graduating from Ferriday in 1951, he took a job at International Paper Company before joining the U.S. Army, where he became a corporal.

By the age of 21, he returned to International Paper Company before deciding to coach football. He went to Robinson, who put him in charge of the Trojans’ junior high team. He won 44 games in a row and five district titles with the Trojans.

When Thomas Jefferson closed, he went to Cathedral High School in 1977. The Greenies went 9-0 his first season and won the inaugural River City Bowl.

He moved across town to Adams County Christian School in 1978 where he coached for 15 years.

In his tenure with the Rebels, Shirley coached alongside Marks from 1991 to 1993. He was fresh out of college and coached the backs, kicking teams, and helping injured players off the field. He did everything asked of him.

“I enjoyed coaching with him more than I did playing. He was a lot of fun to be around,” Shirley said. “I was telling my wife, he was probably the reason I got into teaching and coaching. It led me to become a teacher, a coach, a principal, and a superintendent.”

As an assistant coach with Marks, Shirley saw a different side of the intense coach he once played under.

He remembers the first game he coached with Marks. The Rebels were playing Centreville Academy.

“The last thing he told the team before the game was ‘Remember boys, you can’t change what will be in The Natchez Democrat in the morning, but you can change it tonight,'” Shirley said. “It was the same thing he told us when I played. It could be during the week or Friday night. ‘You can’t change the paper when you are reading it. You have to change it now.”

Shirley learned the importance of developing talent. Marks told Shirley it did not matter what scheme a team ran or the plays they had, what made a difference was who they put on the bus, he said.

A life of love

Casey Young played for Marks from 1984 to 1986. An outstanding motivator and mentor, Marks was a coach players would “follow to the end of the earth and jump off if he asked them to,” Young said.

He pushed players past their physical limits and formed them into young men. They would carry those lessons into their personal lives, businesses and relationships.

Most of all, Marks was a friend and touched the lives of thousands if not hundreds of thousands of people, Young said. Even off the field, he never stopped being a coach and a friend.

When Young learned of his death, tears came to his eyes as he reflected on the memories.

“He always put people at ease. He had the easiest smile,” Young said.

Marks’ wife Neet, who died in 2005, supported her husband. Young said he learned just as much from his coach as he did his wife.

“I learned patience and how to have understanding, unconditional love and determination,” Young said. “It will get you through everything. It’s like the bible says ‘The greatest of these is love,’ he had plenty of it. He showered everybody with it.”

All on the court: Lady Trojans fall in Bi-District…