AT&T will pay for Forks of the Road site fixes 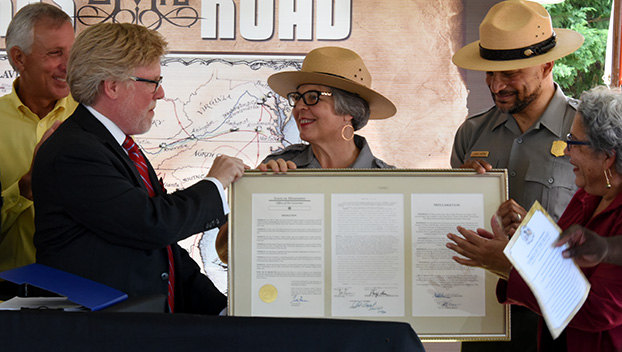 Natchez Mayor Dan Gibson hands framed resolutions to Kathleen Bond, superintendent of the Natchez National Historic Park, at a Juneteenth ceremony in 2021, official handing over city-owned land for the new Forks of the Road National Park. (File | The Natchez Democrat)

NATCHEZ — Asbestos in conduit in the old bridge across Spanish Bayou thus far has held up the donation of the final parcels of city-owned land near Forks of the Road to the National Park Service, but a remedy to the problem is in sight.

Kathleen Bond, superintendent of the Natchez National History Park, recently updated the Mayor and Board of Aldermen on the asbestos situation at the Forks of the Road site.

“The city donated two parcels of land, but there has been a holdup with the donation of the other parcels — the bridge tracts — down where Spanish Bayou runs along Concord Avenue,” Bond said.

“Unfortunately, the discovery was made at that time that there is conduit that runs across that old bridge that contains asbestos and it is broken and eroding. And we’ve spent the last six months trying to come up with a good solution for this problem and we have it and I am here today to ask for permission to move ahead because it is still city-owned property,” Bond said.

The National Park Service conducted a number of studies on the tract of land including the bridge and discovered the conduit.

“The conduit was stamped Bell South. So, in 1969, when that part of Old Washington Road was abandoned for the construction of D’evereux Drive, AT&T now, which was Bell South, decided to run their conduit containing cable across that old bridge. That’s how it crossed Spanish Bayou. I think it was largely undisturbed. It’s a bundle of conduit and it contains the fiber optic cable that comes into downtown Natchez,” she said.

AT&T wants to keep the cable in place and keep it operational.

“We don’t have any issue with that. Our issue is the erosion and the breakage of the asbestos and we want to protect the public from that,” Bond said.

Broken pieces of the conduit are down in the streambed and have to be cleaned up by an asbestos abatement firm and taken to a licensed disposal facility. Following that, erosion control in the area has to be addressed.

“The major exacerbating factors for the erosion control are two culverts that come out of that housing development. That is part of what has contributed to this, so there is some mitigation that needs to happen around that. And then the bundle that actually crosses the bridge needs to be shored up and encased in some new materials,” she said. “AT&T has agreed to take on the roughly $72,000 costs of those mitigations, and they have agreed they will work with this firm that did the geotechnical evaluation. They will have oversight. They will make sure the work is done properly and nothing is done to damage the bridge,” Bond said.

“We are hoping the work will be done in the spring and we will be able to proceed and finalize this donation this summer.”

Rebels fall in semi-finals to Vols, must win Saturday…