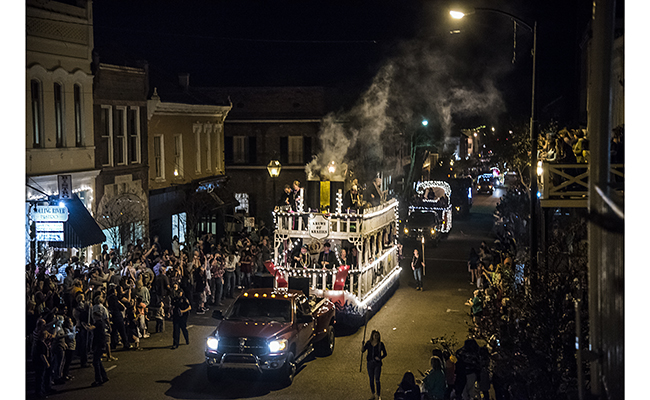 The Krewe of Krazies float makes its appearance on Main Street during the Krewe of Phoenix Mardi Gras parade in downtown Natchez. (File photo)

NATCHEZ — It’s almost Mardi Gras in the Miss Lou with two parades this weekend to show it.

The first is the annual Krewe of Phoenix Mardi Gras Parade, Natchez’s largest parade of the year, which starts at 6:30 p.m. Friday.

The following afternoon is the Krewe of Vidal’s annual parade in Vidalia, which starts rolling at 3 p.m. Saturday.

KOP Parade director Curtis Moroney said he expects upward of 30 floats to be riding in the parade this year after a one-year hiatus caused by the COVID-19 pandemic.

This includes various business and Mardi Gras Krewe participants from throughout the Miss Lou. Since 2020, some of the traditional participants like Fat Mama’s and Callon Petroleum have retired their floats, he said. However, there are still plenty of floats to keep the parade rolling.

There are so many, in fact, that the Krewe of Phoenix is taking up donations this year to buy more barricades for the City of Natchez, Moroney said.

“We put on the biggest parade of the year,” he said. “It’s only right that we do something to help out. We have enough barricades for most events but we don’t really have enough for a parade. We take up a $50 participation fee that has been earmarked for a barricade fund and anyone that wants to give a donation, we need them.”

With as many floats as there are, Moroney said anyone who has a float and wants to register can still do so before Thursday.

“We don’t allow just anything. It has to be a real Mardi Gras float with walls around the riders so they can’t fall off. No trailers and hay bales,” he said.

It is imperative for the smooth flow of regular traffic and parade participants that no one park anywhere on Broadway Street on Friday, Moroney said. Floats start lining up on both sides of Broadway Street at 1 p.m. or earlier for the parade, which starts rolling at 6:30.

He added the best places to park are anywhere uptown off of the parade route and in non-private parking lots.

“The police will be towing cars if they’re parked on Broadway,” Moroney said.

At 6:30, Moroney said the parade would start rolling up Franklin Street to Rankin Street, cross over to Main Street, travel down Main Street and turn left onto Canal Street, pass Fat Mama’s Tamales and turn right onto Orleans Street and ends back on Broadway Street.

The Krewe of Vidal, short for Vidalia, “means all of you,” parade organizer Cassandra Lynch said during at a recent meeting of the Vidalia Board of Aldermen while encouraging everyone to participate in the festivities. “That name represents our community,” she said.

The parade does not exclude anything as a float as long as it can keep up with parade speeds and is presented in a tasteful, family-friendly manner, Lynch said.

“We have four-wheelers, horses, floats, cars, motorcycles—anything goes,” she said. “The Krewe of Vidal is not a specific krewe. It’s the community and the community determines how big the parade will be. We depend on our community to participate to make it happen. We simply want it to be safe, respectful and fun.”

Lynch said she never knows how many participants to expect because she does not require pre-registration, entry forms or fees. Some come rolling in the day of and Lynch fits them in the line-up, she said.

The parade is scheduled to line up at Vidalia Upper Elementary School at 2 p.m. and start rolling at 3 p.m. to Vidalia High School where the parade ends.

In the event of rain, the parade will be rescheduled.