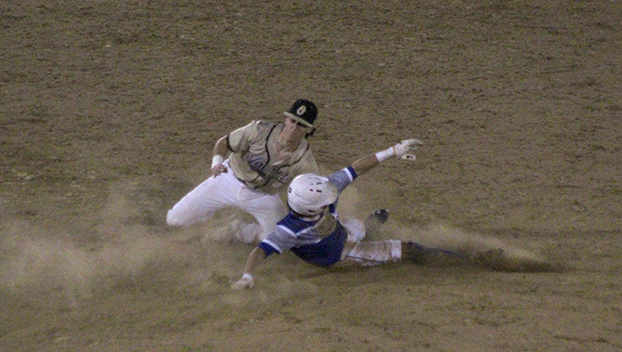 Tristan Burns slides safely into second base. He had two stolen bases in the game and has shown growth in his baseball IQ. He could be a crucial asset to the Rebels on the bases this season. (Hunter Cloud | The Natchez Democrat)

NATCHEZ — Adams County Christian School was three or four plays from a closer game with Oak Forest. Instead, the Rebels struggled to get out of innings and lost 13-3 Monday night. Only five of those runs were earned as the Rebels had nine errors.

The Yellow Jackets capitalized on defensive miscues and AC’s inability to make the routine play. Head Coach Jake Wintson said his team has to flush the errors.

While the team is young, three eighth-graders and two ninth-graders started, they have a lot of athletic potential. They have to figure out how to put it together mentally.

“We can’t limit the damage from errors either. The players have to have the ability to flush it and move on,” Winston said. “I tell them errors are part of the game. You have to move on and flush it. You can’t harp on it. When you harp on it, then you get caught on your heels.”

Adams County Christian School’s Tristan Burns had a strong night on the basepaths with two stolen bases. After the game, dirt covered his uniform and lettering ripped at the chest.

He wears his pants rolled up at the knees like former Mississippi State player Tanner Allen popularized this summer. His speed, hustle, and base running IQ will be an asset to the team.

“He keeps his eyes up when running the bases. He has grown up a lot since last year,” Winston said. “I think last year he had some miscues, and he knew he messed up. Anytime you can realize your own mistake, you can correct it, and he has.”

It was the first game where Adams County Christian School did not have players missing due to basketball. AC senior DK McGruder is one of those players making a return to the baseball diamond.

He played in the State Tournament Friday and Saturday. McGruder showed up Monday and went 2-4 at the plate. He said it was great to return to the ballpark.

“I can get my groove back. It was hard a few weeks ago,” McGruder said. “At the time, Basketball was my main focus. Now I can put my focus into baseball again.”

McGruder played baseball at Natchez last season and transferred to ACCS this year. He said it doesn’t feel different, and he has made friends. The Rebels are like a family to him.

His Team Georgia coach Chris McRaney, who he played baseball for this summer, was in the stands to watch McGruder. He said it was great to see his coach. It put a beaming smile on his face.

In DK’s first at-bat in two weeks, he was retired. He rinsed any nerves with a double in his second at-bat as he blasted the ball down the third baseline.

“The first at-bat, I came out shakey, and after that, I got it together. It was my first time being back on the field in a while,” McGruder said.

“It gave me a lot of adrenaline. It was an adrenaline rush, and my teammates were hyped for it,” he said.

A senior, McGruder has a few goals in mind.

“For myself, I want to do the same thing I did last year. I want to win player of the year,” McGruder said. “As a team, I understand we haven’t made the playoffs in a while. I hope we make it to the playoffs this year.”