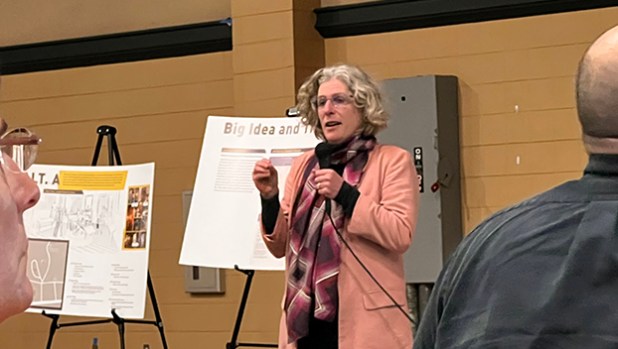 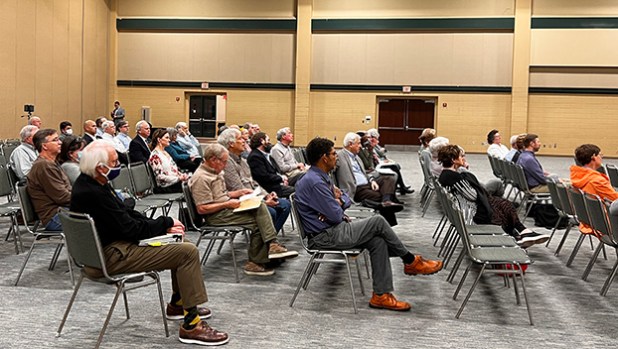 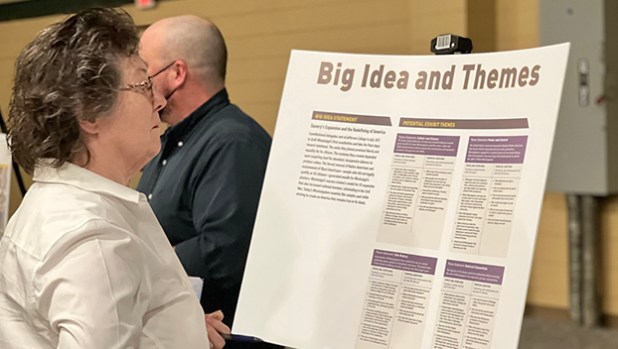 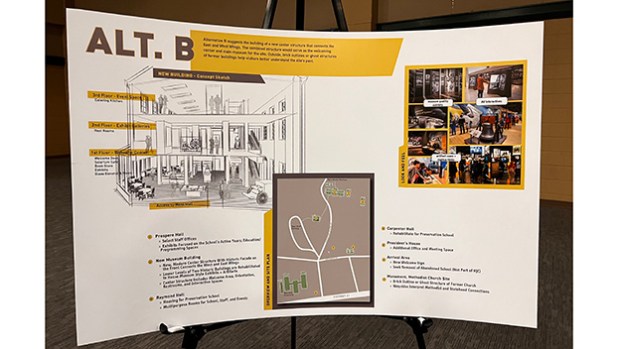 One of two proposals for the college is displayed at the convention center Tuesday. (Sabrina Robertson | The Natchez Democrat) 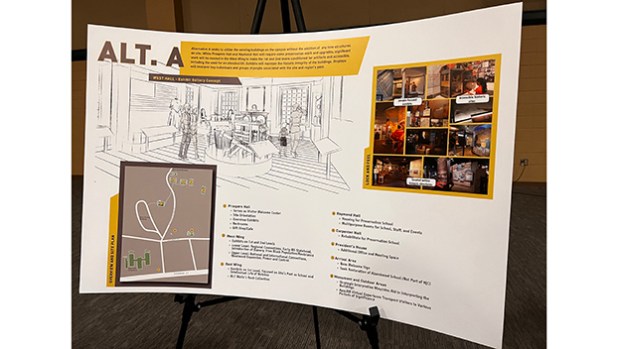 One of two proposals for the college is displayed at the convention center Tuesday. (Sabrina Robertson | The Natchez Democrat)

Historic Jefferson College is the first institution of higher learning chartered in the Mississippi Territory and was the birthplace of Mississippi’s statehood in 1817. Today, the site is operated as a museum with several original buildings dating between 1819 and 1839.

MDAH is working with The Design Minds Inc. to create a comprehensive plan for the future of the historic college.

Tuesday’s meeting helped gather input regarding how it can better meet the needs of the community. This included some early discussion of using parts of the campus for educational and trade school purposes.

“MDAH can foresee Historic Jefferson College hosting a variety of community events from exhibits about the history of the region to a preservation trade school and even a site for special events,” archives and history officials stated when announcing the community meeting.

As plans for the campus are still being discussed, MDAH Executive Director Katie Blount said the preservation of the historic buildings is a top priority.

“We want to find a way to draw people to the site, make an educational and economical impact all while making strides to preserve it for future generations,” she said.

Blount said the timeline for starting and finishing the project has not been determined as it depends largely on if and when federal funds for it are received.

The department presented a broad thesis statement of what story they’d like to tell at the site as well as a breakdown of topics to be explored there, from agriculture and slavery, Native American history, site history and its national connections.

Two proposals for the site were also presented, one that utilizes the existing buildings without adding any additional structures to the site and another that suggests building a new welcome center that connects the campus’s East and West wings. This would serve as the main museum for the site. On the exterior, the plan also proposes brick outlines or “ghost structures” that would help visitors visualize buildings that are no longer there and better understand the site’s past.

In the first plan, without adding new structures, Prospere Hall would serve as the Visitor Welcome Center that would include a museum overview of the site exhibits, restrooms a gift shop and a café. The suggested use for the East and West wings is to house exhibits while Raymond and Carpenter halls are marked as a potential spot for a preservation school with multipurpose rooms in Raymond Hall for events. The President’s House is a suggested meeting and office space. Outside improvements could include adding waysides that interpret the buildings’ usage as well as new signage to draw visitors to the site.

In lieu of ghost structures, Plan A also includes a virtual reality experience to help visitors visualize what is no longer there.

The second plan has many of the same proposed uses for the buildings except for Prospere Hall, which instead of the welcome center would have select staff offices and exhibits that focus on the school’s active years as well as space for educational programs.

The restoration work has been estimated to cost approximately $10 million “without knowing exactly what our plans are” for the site, Blount said.

Archives and history is first seeking to complete work at the Grand Village of the Natchez Indians, a smaller yet important project which is estimated to cost another $6 million, she said.

“While it is a smaller project, it’s a highly used site and has a greater need,” she said.

Some attendees asked the department about their plan for a vacant school building at the entrance to the property, which is owned by the Natchez Adams School District.

While it’s not part of the college, Blount said the old school is part of the “gateway” to the site and needs work.

Blount said MDAH is very interested in a partnership with the school district that would allow MDAH to use the building for whatever purpose best fits the community and both entities’ interests.

“We’ve had conversations about that with the school district and superintendent,” she said. “We are in the early stages of discussing it.”