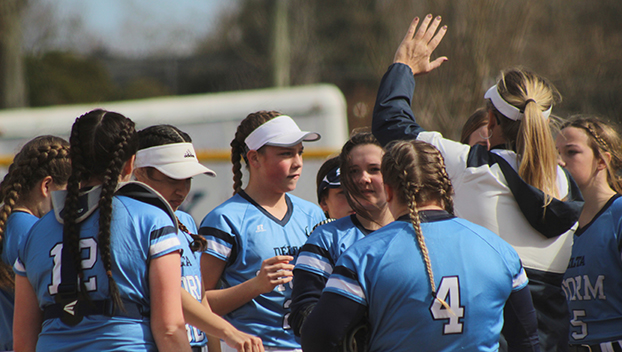 DRY PRONG, La. — The Delta Charter School Lady Storm got good hitting and solid pitching, but nine errors did them in as they dropped their season-opener to the Grant High School Lady Cougars 13-3 in five innings.

Even though starting pitcher Rami Burks was charged with the loss, she held Class 3A Grant to just five hits over four innings. She walked three batters while not striking out any batters. Only four of the 11 runs she gave up were earned runs.

“She did well. She really did,” Lady Storm head coach Jeannie Crnkovic said. “She kept them off balance. She did really well. Just too many defensive errors.”

Delta Charter finally got on the scoreboard when Kayven Atwood doubled in a run in the top of the fourth inning. However, Grant would respond with four runs in the bottom of the fourth to take an 11-1 lead.

The Lady Storm got a one-out single off the wall from Maddi White, which was followed by a home run from Sophie Cooper in the top of the fifth to make it an 11-3 game. Unfortunately, the Lady Cougars scored two runs in the bottom of the fifth to run-rule the Lady Storm.

“We had too many errors in the outfield,” Crnkovic said. “We put the ball in play, which was good. But we’ve got to work on our defense.”

Grant ended up with seven base hits while Delta Charter had six base hits. White ended up going 2-for-3 to lead DCS at the plate. She also had a double in the top of the first inning.