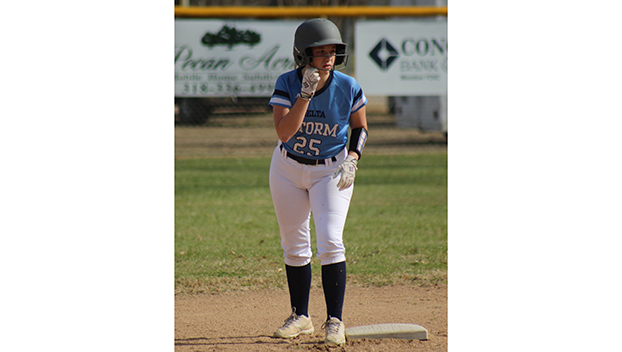 FERRIDAY — After scoring a combined 37 runs in its last two games, Delta Charter School’s varsity softball team was held in check by LHSAA Class 4A Franklin Parish as the Lady Patriots took a 12-3 win in the Lady Storm’s home opener.

Lady Storm head coach Jeannie Crnkovic said that errors, base-hitting and pitching were the difference in the outcome of this game — even though both teams had 10 total hits.

“We left too many people on base. We left too many players in scoring position. Even though both teams had the same number of hits, they got theirs when they needed them. Ours were spread out and didn’t come at the right time. We couldn’t string together consecutive hits,” Crnkovic said.
She added, “We had five errors. They had none. There you go. We had a lot of walks. Our pitching’s not up to par. It was a better ball game than what we played (last) weekend). But we have room for improvement.”

Franklin Parish led Delta Charter 2-0 after three innings of play and extended its lead to 4-0 in the top of the fourth inning. The Lady Storm responded with a two-run rally in the bottom of the fourth to make it a 4-3 game.

Rani Burks was charged with the loss on the mound for Delta Charter despite a solid outing.

“I was proud that Rani held them to four runs in four innings,” Crnkovic said.

Rachel Brown and Maddi White each went 2-for-4 to lead the Lady Storm at the plate. A. Rodgers hit a home run and M. Middleton had a double for the Lady Patriots.

The Lady Storm (2-4) traveled to Mansura, La. to take on Avoyelles Public Charter School at 5 p.m. Thursday before playing at the Grant Tournament on Friday, March 4 and Saturday, March 5.

Delta Charter doesn’t play at home again until Saturday, March 12 when it hosts its own tournament and then doesn’t have another home game until Monday, March 14 against Mangham High School.