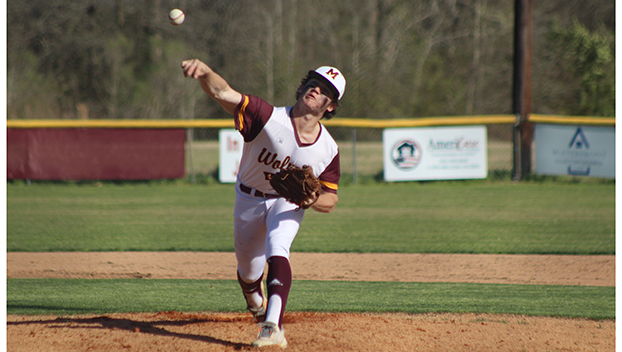 Starting pitcher JJ Farris earned a win against Oak Hill last week. He along with the Monterey Wolves are using a loss in the semi-finals of last year’s playoffs as fuel this season. They want to return to Sulphur. (Hunter Cloud | The Natchez Democrat)

MONTEREY — The Mighty Wolves of Monterey are 6-1 to start the season, and vengeance is on their mind as they try to repeat last season’s run.

With a favorable draw, good matchups and playing their best ball, Monterey shocked the community and Louisiana by reaching the state semi-finals in Sulphur in 2021. They were a No. 20 seed and lost to Choudrant in the semi-final round 1-0 after beating Zwolle, Mt. Hernon and Pitkin.

Senior Kerry King said the deep playoff run brought the community together and bolstered the team. Historically, Monterey has been a basketball community and its baseball team has made the state semifinals just three times in school history. The run has drawn a big crowd for their games this season, King said.

“It left a sour taste in everybody’s mouths, even the guys who aren’t with us today,” King said. “We are looking to go back and win the whole thing this year. We have to gel together. Our pitching staff has to be better and our response has to be better. Overall, we have to play better. I think we have the capability to be back right where we were last year.”

As a squad, Monterey has solid hitting top to bottom and has good pitching. They are working on their fielding but that takes practice time and repetition to improve. After losing a handful of seniors, the Wolves are starting players in new positions and gearing up for another run.

Seven of their 11 games remaining are district games. Currently, they are ninth out of 32 teams in the LHSAA unofficial power rankings for Class B. Head Coach Eric Richard believes they have room to grow.

“Hopefully by the end of April, we will be playing our best baseball then,” Richard said. “We have started well but our best baseball is yet to come. Our strength right now is having good at bats. We have put the ball in play and made the defense make plays. We have been consistent at the plate.”

On the basepaths, Monterey has improved from last season. Against Oak Hill, they took advantage of deep fly balls to tag and advance and any throwing miscues by the defense.

Having good luck in their draw could determine how challenging their path will be. Last season, they got in as a No. 20 seed and surprised some teams, but they likely will be a higher seed this year, he said.

“I feel we will be a higher seed this year and that is going to be a role reversal for us,” Richard said. “How do we handle success? This year we have had some success and carried it over from last year. How this group handles success may be our biggest challenge. We won’t sneak up on anyone this year.”