Emergency Operations: Watch out for storms during your early morning work commute 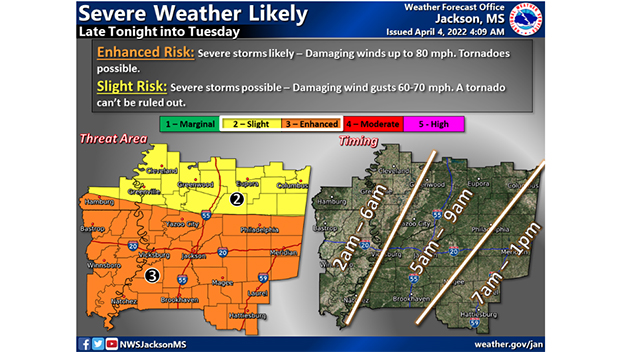 During a Monday afternoon weather briefing, Adams Emergency Operations Center Planning Chief Tom McGehee said the worst of the storm system is expected to begin around daybreak at approximately 5 a.m. when many begin their work commutes.

For this reason, he suggested that early travelers and schools take precautions and possibly delay opening until later after the storm passes.

“The issue is it’s 83 degrees out and the low tonight is 63 degrees. Cold air coming into all of the warm air that we’re having is going to cause some problems for us,” McGehee said.

The storm is expected to come in from the west, hitting Louisiana first, before covering most of south and central Mississippi.

According to the Jackson National Weather Service, Adams County is in the middle of an “enhanced risk” zone from 2 a.m. to 6 a.m. where severe storms are likely and damaging winds up to 80 miles per hour and tornadoes are possible.

“The estimated arrival time is around 5 a.m. and we don’t know how long that is going to last,” McGehee said. He added there is also a limited threat of localized flash flooding from 3 a.m. until noon Tuesday affecting the entire area between Winnsboro, Louisiana and Meridian.

There is already a flood watch in effect in Wilkinson County, south of Adams County, through late Tuesday morning, he said.

McGehee said he does not anticipate opening the Adams County Safe Room on Liberty Road as a shelter unless there is a tornado watch in the area.

“Hopefully this will be another non-event,” he added.

Natchez man will serve 25 years for abuse of…