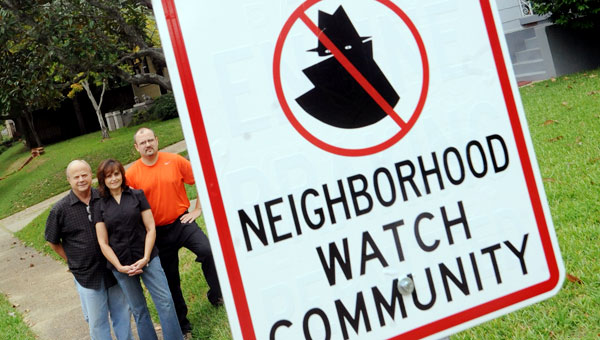 File photo | The Natchez Democrat Signs warn anyone who might be up to no good that eyes are on them.

Gibson said the progression of some major projects, such as the Eola Hotel restoration, the raising of Silver Street and the Broadway Street train depot restoration has been slowed by inflation. But he said the projects are still happening.

The Silver Street raising project meant to prevent flooding and help accommodate cruise ships docking in Natchez is now projected to cost well over the estimated $1 million, he said.

He also said while the city intended to maintain its old park equipment until it could be replaced with new equipment, some parks had play places in such bad shape they had to be taken down immediately over safety concerns.

However, Gibson said despite challenges seen all across the country, Natchez has experienced economic growth and job creation. He and the police chief also said Natchez’s crime rate has been going down.

“We have been making serious steps to address crimes,” Gibson said. “We are backing our police officers, making sure they have the equipment they need.”

Patten stated that his department couldn’t hear police traffic and as a result couldn’t respond to situations where his deputies could have helped in the city.

“I read the article where the sheriff made the comment about us not being able to communicate. It’s not true,” Daughtry said.

Daughtry added at the same time the switch to a new channel was approved, so was the creation of a “common law channel” that can be used by all Mississippi departments around Natchez to communicate when there is a situation that requires a multi-agency response.

The reason for adding a new channel that they can’t listen to, he said, is because they don’t know who else could be listening for the wrong reasons.

“All of a sudden people are upset. It’s because they want to be nosey and listen. I’m sorry, but I’ve got a job to do to keep the citizens of Natchez safe,” he said.

Gibson said he supported the switch to a private channel for the safety of officers and the public.

“We had people with scanners posing as lookouts and alerting the people committing crimes before the police arrive,” Gibson said. “It’s a dangerous situation.”

He added another reason to keep the channel private is that there had been “information being shared on a public channel that should not be public,” such as names, addresses and descriptions that a 911 caller may share with a despatcher to help officers respond.

“We’re getting criticism for that, but the safety of our officers and our community is more important,” Gibson said.

Daughtry later said the sheriff’s office could hear police traffic on the old channel, but his department couldn’t talk back and forth with them through it. He said the common law channel would allow them both to communicate on the same channel.

The difference in their response time is the difference between turning a radio dial three to four clicks or picking up a phone and calling them, Daughtry said.