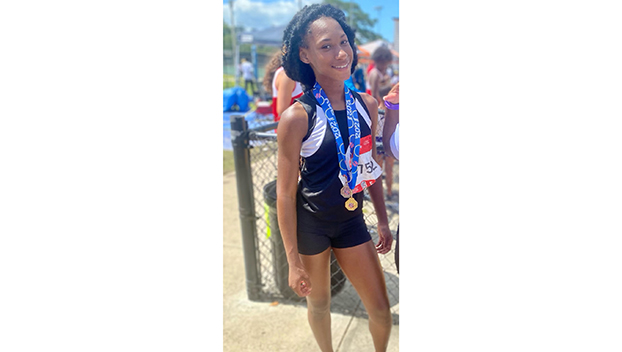 FAYETTE — Jefferson County Tiger Charve Gibson led the way at the MHSAA 7-3A District Track Meet Monday in Tylertown. Gibson is a seventh-grader but she didn’t show it by finishing first in two events and second in two events.

A member of the Raising an Alliance of Discerning Leaders Track Club, Gibson worked hard this summer to improve in her first year of running track. She said her family got her to start running.

She trained in the 200, 400 meter races and long jump with RADL coach Eddie Jackson. His summer track program helped her be prepared for this season and Jackson was one of her biggest supporters, she said.

“It helped me a lot. I don’t think I would have done as well as I did without Eddie,” Gibson said. “He came to support me in my last track meet. He came to all my track meets.”

Gibson took first in the girls Long Jump final with a distance of 16 feet and two inches beating the second place jumper by 10 inches. She took first place in the 400 meter dash running a time of one minute and 1.97 seconds.

In the 100 meter dash, she finished with a time of 13.01 seconds to take second place, which was a good result for her first time running the 100 meter dash. She came .76 seconds behind first place in the 200 meter dash and ran the race in 23.07 seconds.

“I had a conversation with her mom before the meet. I knew what she could do. I knew she would have a good showing,” Head Coach Benta’ Thomas said. “I had compared her times with others. I had a good feeling she would do well. She has a lot of room to grow but she can accomplish a lot in this sport if she stays with it. As long as she keeps her hunger, she will do better.”

As a team, the Jefferson County Tigers finished fourth and will advance to regionals. It wasn’t a bad day for a young team who has battled injuries this season, Thomas said. He is hoping Gibson will be able to continue her success at regionals on April 12, 2022.

“It’s a wonderful thing. It makes it fun. It challenges you as a coach to push them harder,” Thomas said. “You want them to succeed and want them to be the best they can be and go beyond that. I have asked my athletes to push beyond their limits. You have to go through the hurt in practice and it will be easy in the meet. Before her event she will tell me ‘I’m scared,’ or ‘I don’t know what I’m doing.’ Once she gets the jitters out she is focused and she does what she is supposed to do.”

“I was feeling good that day. I didn’t know I could do it. I was doubting myself. For me to improve on my times, I really felt good about myself,” Gibson said. “I want to thank my coach Thomas for letting me run with the high school team even though I’m in junior high. He gave me a good opportunity to show my talents.”

She is one part of a young team who is talented. Thomas said his kids will be formidable in the future and he knows what to expect from them.

He said if the group can stick together they will be pretty good over the next few years. His 100 meter, 400 meter and 800 meter relay teams for boys and girls qualified for the regional meet. It was an uphill battle for them because Tylertown is a powerhouse in the sprints, he said.

“We did what we had to do to qualify. We look forward to building and getting stronger,” Thomas said. “We will keep the mindset of ‘We can do it.’ I try to drive the mindset of work. These kids work and it shows. They are working to the next level. It is a continuous grind and process.”