‘We want to make it to state,’ Lady Wolves blast 17 hits to advance in LHSAA Class B Playoffs 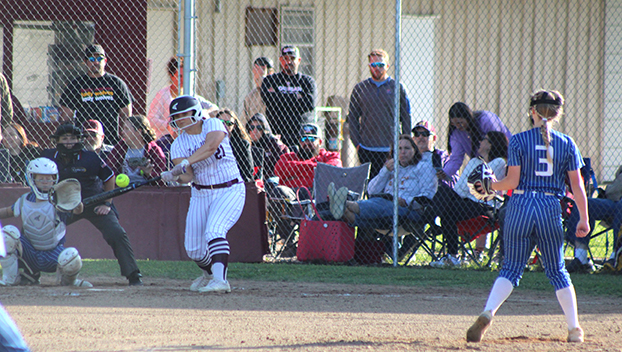 Senior Meah Peoples fouls off a pitch during the third inning. She finished the game against Pitkin with two hits and two RBIs. Monterey had 17 hits and won 12-3. (Hunter Cloud | The Natchez Democrat)

MONTEREY — Pitkin jumped out to a quick 3-0 lead Monday afternoon, but the Lady Wolves didn’t flinch. Monterey scored eight runs in the bottom of the second to jump out to an 8-3 lead en route to a 12-3 win in the opening round of the LHSAA Class B playoffs.

Monterey’s bats were on fire in the game as they produced 17 hits. Junior Hannah Hitt had four hits, and Briana King had three. Meanwhile, senior Lady Wolves Meah Peoples and Allie Lipsey had two hits, and Maddy Green had one hit.

Lipsey hit a double to score two runs in the second inning and stole two bases in the game. She said it felt great to advance in the playoffs.

“I’m so excited it was the first time we have had a home playoff game in a while,” Lipsey said. “It’s exciting to come out here and win today.”

There was not a lot of pressure on the Lady Wolves’ pitching staff in the game. King threw four innings and struck out five, while Hitt threw three and struck out two.

Hitt closed down the Lady Tigers’ biggest threat when they had two singles in the top of the sixth. She got a strikeout, groundout, and fielders’ choice to get out of the inning.

Monterey added two more insurance runs in the bottom of the sixth to cruise to victory. It could be the Lady Wolves’ final home game for the seniors.

“It means a lot more. I thought we have learned to appreciate all of the moments now,” Green said. “Earlier in our career, we probably would have taken this win for granted.”

Lipsey said her four years with the varsity team came fast. Now each game is possibly their last. Head Coach Carey Shively said he isn’t even sure what to expect in the postseason.

Rain canceled practices and games last week, so they came into the game a little rusty. Lipsey said it is bitter-sweet to have these fleeting moments.

“I know everyone says it. I know there is a lot more to go, but it really is bitter-sweet,” Lipsey said. “It is so sad to have to leave these girls behind. It is the team I’ve played with forever.”

Fans packed the bleachers and the outfield in support of the Lady Wolves. Some snuck into the left-field stands as the public address announcer said “Y’all might not have paid, but we appreciate your support.”

They have a home-field advantage that travels with them pretty well when they go on the road to teams like Quitman, who they will play Wednesday with the first pitch set for 7 p.m. If the Lady Wolves were to host in the third round, they would receive a lot of support from the community.

Each season, Shively has his girls write down the goals they want to achieve in the upcoming season. A goal the seniors wrote down at the beginning of the season was to make the state finals.

“We want to make it to state,” Peoples said. “I feel like if we show up to play, we can beat anybody.”