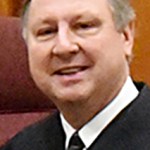 Johnson is expected to serve until May 26.

Johnson retired in 2018 after serving as a Sixth District Circuit Court Judge since 1994.