Three Lady Bulldogs walk off field together one last time 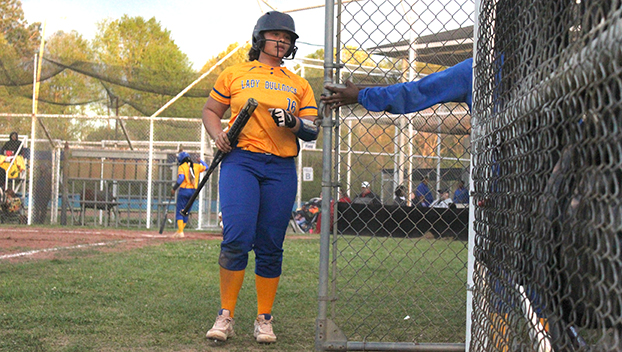 Alcorn State signee Aysia Palmer exits the playing field after being retired in a game against Brookhaven. She will play softball for the Braves next year and feels excitement and nervousness. (Hunter Cloud | The Natchez Democrat)

NATCHEZ — Three Lady Bulldog seniors walked off the “Rio” field at the Natchez-Adams softball complex one last time on Monday. Aysia Pollard, Kyla Baskin, and Ta’Niyah Johnson leave behind a young team filled with promise after a 13-1 win over McComb Monday night.

Head Coach Bonita Hamilton said she was happy with her team’s efforts this year as they fought in every game they played. Youth and inexperience hurt them the most as they missed the playoffs.

Johnson said leaving behind a team is emotional. She hadn’t started crying yet but might start when she got in her car to drive home.

“It is emotional because you are letting a lot of people go. We have bonded with these girls,” Johnson said. “I’m crying when I drive home. Seven years we have spent together. I’m going to miss the encouragement from the girls and all of the different personalities.”

Music blared from a speaker on the sidewalk as they talked and players danced around. One Lady Bulldog slipped and fell into the water as the seniors looked on.

Johnson shifted her focus to what is ahead. She said she plans to go to the University of Southern Mississippi. Her major could be physical therapy, so if she is ever hurt, she can make herself better, she said.

This season she lost her technique in batting, but Pollard stepped up and helped her improve.

Baskin started playing softball when she was four and has been with the team since her freshman year. She said she learned to be nice to others from her time in softball.

“Once you are nice to people, they will be nice to others. I can work with these people in the future,” Baskin said. “I will be going to Ole Miss to study marketing. I would like to be in the business world and do design work. I also plan on being a real estate agent too.”

Pollard’s next destination is the softball field at Alcorn State, as she signed a national letter of intent to play softball there in January. She has been a leader on and off the field this season.

Her best friend and travel ball teammate Laiken Davis was in attendance for most of her games. They will be playing at different schools next spring. Davis is going to Southeastern Baptist College in Laurel, and Pollard will be in Lorman with the Lady Braves.

“I’m excited and nervous,” Pollard said. “I’ll get to play in college, and it’s a big thing for me. I’m nervous because I don’t know what to expect.”