So-called ‘Bird Flu’ in the U.S., but not Louisiana, LDWF says 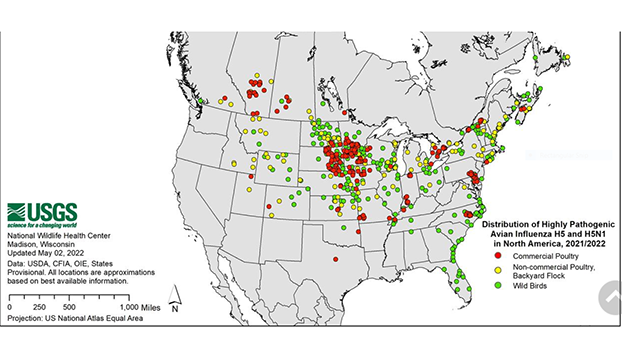 A map of reported bird flu cases in the US. Louisiana has not had any cases reported according to the Louisiana Department of Wildlife and Fisheries. (Courtesy Photo | LDWF)

BATON ROUGE — An outbreak of Highly Pathogenic Avian Influenza (HPAI), or bird flu, seen in parts of the U.S. this year has not been detected here, the Louisiana Department of Wildlife and Fisheries (LDWF) said.

The Centers for Disease Control and Prevention (CDC) considers the current risk of the outbreak to be low to the general public even in states where HPAI has been seen. While bird flu rarely affects humans, it can sometimes be deadly.

However, they do recommend following standard protective practices when dealing with birds and when coming into contact with surfaces or objects, such as bird feeders, that may be contaminated by bird saliva, mucous or feces.

Those protective practices include:

HPAI is affecting wild birds and domestic poultry across much of North America, primarily in the Midwest and along the Atlantic Coast of the U.S. The U.S. Department of Agriculture’s Animal and Plant Health Inspection Service and other agencies have detected bird flu in wild birds in 34 states, the closest in Texas and Alabama, and in commercial and backyard poultry flocks in 29 states.

Only one human case of bird flu has been confirmed by the CDC in the U.S. during this outbreak. The case affected a commercial poultry industry worker in Colorado.

Rick Hamrick, a Mississippi Department of Wildlife Fisheries and Parks Small Game Biologist, said there is no new detected cases of the rabbit disease. Mississippi’s first case of RHDV2 was detected in late September in a domesticated rabbit near Jackson. As of right now only four Southeastern states have detected the disease, Georgia, Florida, Kentucky and Mississippi. There has been no detection in wild rabbits yet.

RHD has a mortality rate of 20 percent, on average. In localized settings, the mortality rate ranges from 5 to 70 percent. In this instance, 21 out of 22 rabbits died within a 6 to eight-day period. Currently, there is no vaccine for the disease approved for sale in the US. According to MBAH’s website, there is a vaccine for the disease in development and two vaccines, which could be imported with special approval. People can call (601) 359-1170 if they have any questions. As of right now, there is no evidence of the disease in wild rabbit populations in Mississippi.