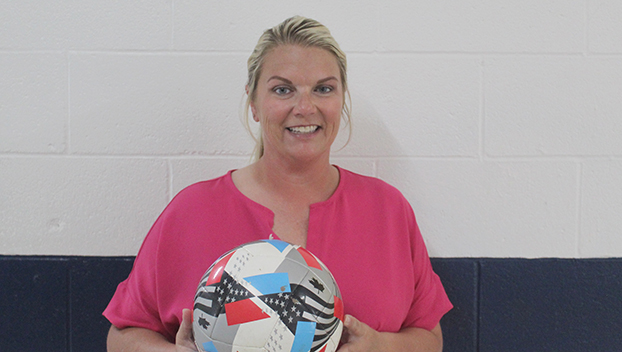 FERRIDAY — Delta Charter head coach Christal McGlothin led her team to a 7-9-4 season and a playoff berth. They lost to Louise McGehee in New Orleans 8-0 in the first round of the playoffs but they were the only soccer team in Concordia Parish or Adams County to reach the playoffs. It is her passion for coaching and the success the Lady Storm had this season that makes her the 2022 All-Metro Girls Soccer Coach of the Year.

McGlothin is a graduate of Huntington High School and the University of Louisiana-Monroe. She works at Delta Charter as a paraprofessional. She started coaching soccer there as an assistant about seven years ago and when Daniel Rivera left she became head coach of the soccer team two years ago.

She gives him credit for helping her grow as a coach. Her son started playing when he was five and the soccer team needed a coach so she stepped into the role and has coached for 16 years since then.

“My son fell in love with the game and so did I. I have stuck with it every single year and I coached when I was seven months pregnant,” McGlothin said. “When my son graduated in 2019 people asked me if I would still coach. I can’t see myself leaving this group of girls. Every year I tell myself ‘I can’t leave these senior girls.’ I grew a closer bond with them. It is not something I’m ready to give up.”

At first, she had to study on her own because she didn’t play soccer when she was older. Rivera contributed to what she had learned about the game and helped her learn more. He was the first person she told when she was chosen as the girls’ soccer coach of the year.

Away from Delta Charter’s sidelines, she coaches a team in the Miss-Lou Soccer Club in Vidalia. She is a vice president and competitive director at Miss-Lou soccer and enjoys coaching the kids. The club helps develop players in the area for their high school teams. Club soccer makes a difference, she said.

This past year was the first time she didn’t coach a travel soccer team for Miss-Lou Soccer Club because so many seniors were graduating. McGlothin said, “I can’t imagine not coaching soccer.”

Her seniors this year helped because they were her right-hand people. Chloe Smith was the strongest leader in the group and was on top of things every day.

“She loves God and you see it through everything she does. I have learned a lot of patience through her,” McGlothin said. “I watch her day in and day out. I’m sure sometimes she is frustrated. I watch her not get frustrated and be patient. I learned how to be patient because of her. She was the backbone of the team.”

Their season is best summarized by growing over the year. Nearly half the team, 10 out of 26, were seventh or eighth graders. They were young and inexperienced but by the end of the season, they were playing better soccer.

McGehee was a tough matchup for them. The drive down there was long and they were missing key starter, Sidney Moore. Delta Charter had confidence going into the game but they didn’t advance. The Lady Storm should have been a higher seed but they had four draws this season.

“It was a goal for my seniors to make the playoffs. We have made the playoffs more times than not since I started here,” McGlothin said. “We had more ties than usual this season and most of the games we lost were by one goal. I’ll have one senior next year and some younger ones who have grown to love the game a lot. I am really looking forward to what is next.”

Sharp will be the team’s leader next year. She was hurt at the end of the year and missed the playoff game and it hurt the team not to have her presence. Emma Graves will play a big role as well as Racheal Brown.

Brown didn’t play soccer before this season and became a starting player. She was McGlothin’s rookie of the year. Kinsleigh Powers returned to the soccer field to play again after taking a year break. The freshman stepped into Sharp’s roles at the end of the season and can play anywhere McGlothin puts her.

Goalkeeper Addie Johnson, who had a shutout early in the season, will return as well. McGlothin expects her to be a really good goalkeeper by the time she graduates. McGlothin looks forward to soccer next season.

“I look forward to it every day. It can be very time-consuming but I wouldn’t do it if I didn’t love it,” McGlothin said. “I want to see these girls come out and do what I know they can do. I want them to have the confidence we can build for the future. I don’t want them to have the mentality of, ‘It is going to be terrible.’ Every one of them is capable of getting better at the game. I know we will have another solid team.”