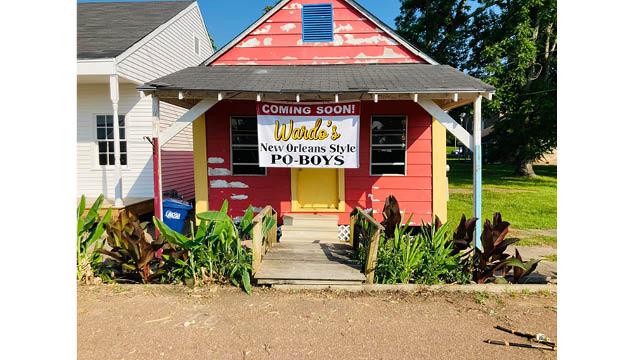 Wardo's, serving New Orleans-style po-boys and ice cream, is expected to open on Broadway Street across from the bluff in late June. (Facebook photo)

NATCHEZ — Natchez residents and visitors to the city have a new sandwich and ice cream shop to look forward to sometime in late June when Wardo’s opens on Broadway across from the Natchez bluff.

Tom Graning, owner of the GoMart on Seargent S. Prentiss Drive, along with his sister and brother-in-law, Jane and Sam Weems, his sister, Margaret Beasley, and son, Wright Graning, are opening the restaurant and naming it for the late Ward Graning, who was known by friends and family as Wardo.

Ward Graning, who died unexpectedly three years ago in June, was a brother to Graning, Jane Weems and Margaret Beesley, brother-in-law to Sam Weems and uncle to Wright Graning.

“We have been wanting to do something together for some time now and Sam and Jane, who own the Waterfront Grill in Monroe, still have a house in Natchez, and they’ve wanted to do something here, too,” Tom Graning said. “We have been looking for the right place during the last month or two and this location became available.”

Wardo’s will serve New Orleans-style po-boy sandwiches and will have scooped ice cream.

“We will have limited, bar-type seating. There will be some area in the backyard for seating, but it will mostly be grab and go food and a very simple menu,” he said.

In addition to typical, non-alcoholic beverages, Graning plans to offer beer and daiquiris.

“We have lots of work to do to the building, so it will likely be sometime in mid to late June before we open,” he said.

No concerns about violence during Juneteenth Devil’s Punch Bowl…