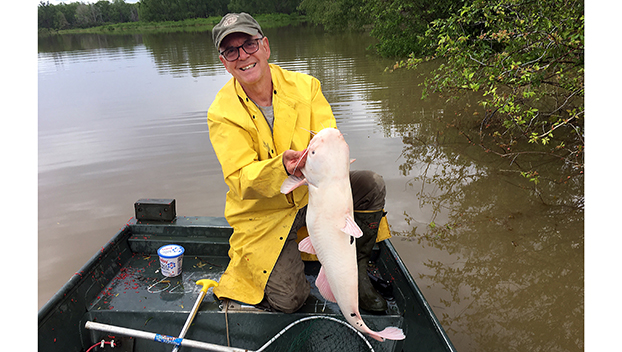 Mitchell Whitaker hauled in a ghostly white blue catfish that has Albinism on Mississippi River Back Water near Lake Mary and Fort McAdams in Wilkinson County. Whitaker said he has fished and hunted for a while but never caught a catfish like it, his buddy Herbert Dooley took this picture and was in the boat with him that day. (Submitted Photo | Woodville Republican)

LAKE MARY — Anglers Herbert Dooley and Mitchell Whitaker hauled in a rare catch on a trotline this week. They managed to hook a 12 to 15 pound blue catfish that had small posts of dark coloration and pinkish tints to its fins with snow white coloring.

It was caught in Mississippi River backwater near Lake Mary on Dooley’s property. He said they set trotlines while the river was rising in late April a couple of days before the river neared its crest in Natchez.

He happened to be running trotlines for the first time in a few years since he retired from a long oilfield career. In fact, the last time he ran trotlines before this April the gnats were so bad he had to rub his shoulders on his face while working tackle with his hands.

After snapping a picture, the fish was released back into the water. Whitaker, who has hunted and fished his entire life, said he had never caught a catfish like it.

“The fish was so unique I didn’t see any interest in killing it. We let it go on its way,” Whitaker said. “Had it been a normal catfish I would have thrown him in the boat. He was so unique. It was more of a human interest thing for me.”

Any catfish he catches on a trotline rigged with 40 treble hooks, and a bait he could not reveal, are fileted and consumed. “They don’t last very long.”

They left the trotline for another night and did not catch any more albino fish. Dooley and Whitaker did manage to catch enough fish to put in their freezers. The two have spent about 60 years hunting and fishing.

“Anyone who spends that amount of time in the woods will have stories,” he said.

Blue Catfish have a variety of different pigmentations in addition to albinism. Kayla Kimmel, a United States Fish and Wildlife Service Fisheries Biologist, said catfish could be piebald with black and white markings, leucistic, which is a white pigmentation, and melanistic, which is black pigmentation. Catfish can also have an orange pigmentation, all of these catches are rare because the non-natural color makes them stick out to predators.