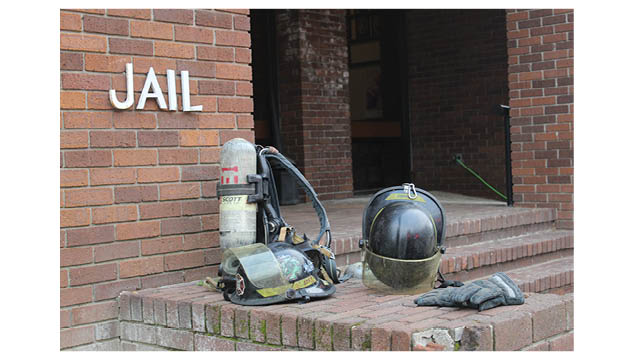 Inmates recently set clothing and blankets on fire on the third floor of the Adams County Jail. (Hunter Cloud | The Natchez Democrat)

NATCHEZ — Adams County supervisors agreed to look into a request from Adams County Sheriff Travis Patten to purchase one or more small portable buildings called “pods” from the Core Civic correctional facility on U.S. 84 in Natchez.

Patten said he would like to use one or more of the pods as a place to segregate inmates as necessary.

“That request is me trying to think of ways to temporarily put a Bandaid on the jail problem we face every day,” Patten said after the Tuesday meeting of the supervisors.

At one time, Core Civic planned an expansion at its Adams County facility, but that expansion did not come to fruition and several of the pods, which are precast, are available for purchase.

“I would like to get one of the things to use as a segregation unit. We can’t administratively punish an inmate when they do things like damage the jail because we don’t’ have anywhere we can lock them down. A segregation unit is someplace we could put the instigators along, which would help us deal with what’s going on right now,” he said.

Patten said there is room to locate the pod near the courtyard area at the sheriff’s department building at the corner of Wall and State streets.

Supervisors instructed Robbie Dollar, Adams County road crew manager, to take a look at the pods and determine what the cost would be to move one and set up plumbing, water and electric power within one.

The jail has failed numerous inspections and supervisors have been told it is not fit to house inmates. The current jail has been called a danger to inmates and jail staffers.

“Every two weeks we hear about the jail,” Middleton said.

Patten said closing the Adams County jail and housing prisoners in Louisiana could pose a significant legal issue, particularly for pre-trial inmates. He said most likely each inmate would have to sign a waiver in order to be taken across state lines.

“What the supervisors don’t seem to understand is, wherever they are, these inmates are their responsibility,” Patten said.

“We don’t have the money to do anything about it,” Gray said. “If the conditions at the jail are as bad as you say they are, we need to find someplace else to put them.”

Supervisor Kevin Wilson said it would take five years or more to build a jail if the effort was started today. He also inquired about the number of inmates coming into the jail from the City of Natchez Police Department.

The city contracts with Adams County to house its inmates at the county jail.

Patten said he would be fine with discontinuing the contract to house city inmates, if that’s what the supervisors choose to do.

“What they need to do is put some padded cells back in the city jail and keep their misdemeanors there. We are being flooded with city inmates. That would ease some of the load at the county jail,” Patten said. “Right now, the city jail is just sitting there (at the city police facility) being used for storage.”

Patten said supervisors should work together and with him to come up with a solution.

Also during Tuesday’s meeting, supervisors discussed and approved the first steps to borrowing millions of dollars, which will be used to pay for recreation improvements and take up the shortfall in federal money to complete the Morgantown Road project.

“Everybody knows that Morgantown Road needs and deserves attention. Hands down. But if we are borrowing money to fix long-term problems, why not get enough to build a jail in the process as well,” Patten said.

“Personally, I would rather be on the front end of working together and getting this issue fixed, rather than getting sued and being under a consent decree like Hinds County,” he said. “Once you are under a consent decree, you have to follow all those instructions to a T and pay the people the federal government sends down to oversee that their instructions are followed. On top of that, construction prices will quadruple because you are not choosing to do it, but are being forced to do it. And there are no limits when you are getting sued for a constitutional violation. Tort reform does not apply to that.”