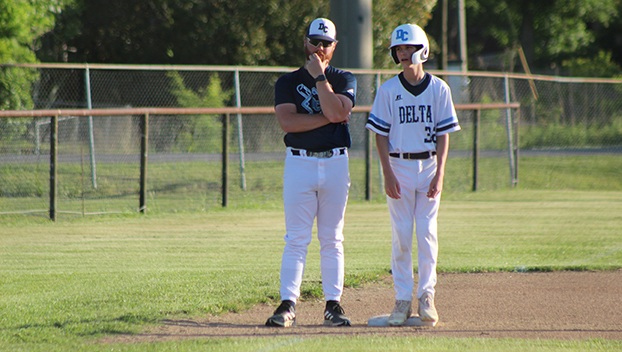 Delta Charter head coach Nicholas Kennedy coached the team to the state quarterfinals in his first year of coaching the team. (Hunter Cloud | The Natchez Democrat)

FERRIDAY — Delta Charter School’s varsity baseball team surprised a lot of people who followed the Storm by earning the No. 8 seed in the 2022 LHSAA Class 1A State Playoffs and advancing all the way to the state quarterfinals.

For those achievements, Delta Charter first-year head baseball coach Nicholas Kennedy has been named the 2022 Natchez Democrat All-Metro Baseball Coach of the Year.

“That’s awesome. I appreciate that. Starting as a young coach, there are some things that brighten your day and that’s one of them,” Kennedy said Wednesday morning. “Truthfully, it means more than words can describe.”

Kennedy said he wouldn’t have earned this accomplishment without the support of his assistant coaches and his players. He even added that even though his name’s going to be on this “award”, his players’ names should be right beside his.

“All these awards and accomplishments I’m getting, without my guys, I’m nothing. Without my coaches, I’m nothing,” Kennedy said. “It means a lot. Not only for me, but my program and the kids.”

Kennedy was named head coach at Delta Charter after spending just one season as head coach at Vidalia High School. Not much was expected of the Storm when the season started. And even though they got off to a rough start and were at one time 3-9 overall, the Storm finished the season strong, winning seven of their last nine regular-season games to end up 10-11.

Their strength of schedule is what helped the Storm get that No. 8 seed in the Class 1A Playoffs. They rode that momentum into the postseason with a decisive 25-1 win over No. 25 seed Lincoln Preparatory School in five innings in the bi-district round and a 13-3 win in six innings over No. 9 seed Northwood-Lena High School in the regional round.

Unfortunately, after two blowout wins at home, Delta Charter traveled to Lake Charles, La. to take on No. 1 seed Grand Lake High School in the quarterfinals. And that when the Storm’s season came to an end after a 10-0 loss in five innings.

“I wouldn’t say it was a perfect season. We had our ups and downs,” Kennedy said. “We’re laying a foundation for what’s to come and for the future of Delta Charter baseball. Overall, it was a success.”

As to what stood out to him the most about the season, he said, “The want-to and the passion (the kids had). Coaching, there are certain things you can teach and there are certain things you can coach. We had players who wanted to get better and who wanted to succeed. That’s what I wanted in my first year. Laying the foundation, that makes my job a lot easier.”

Kennedy said the one thing he learned the most in his first year coaching at Delta Charter was not letting his emotions get the better of him.

“I learned a lot dealing with the ups and downs. We started off rough. That taught me how to be patient. Continue to trust what me and my coaches are preaching,” he said.

Kennedy said he wants to see the baseball program to continue to make deep runs in the playoffs — not only next year, but for years to come. He added he wants his team to put fear in their opponents.

“I’m not a guy who’s into looking too far ahead. But my expectations are to continue to win ball games. We want to compete. We want to be the best we can possible be year in and year out,” Kennedy said. “I feel like there’s no reason we can’t continue to make deep runs. We are losing three vital pieces to the puzzle next season. But I feel like we’ll make another deep run next season.”

Kennedy said there are several people he would like to thank for helping make the 2022 season at Delta Charter possible and for helping him along the way — including coaches when he played baseball at Southaven (Miss.) High School as well as family members

“Coach Ed Rich, he taught me my sophomore year when we won state at Southaven High School. Coach Jeffery Edge. He was my baseball coach my whole high school career. He was the assistant coach I looked up to in my time at Southaven. Coach Gary Scott. He was my high school baseball coach my junior and senior years at Southaven. He’s now coaching at Kossuth High School,” Kenndy said. “Coach Mike Morris. He now coaches football at Vidalia. I coached underneath him and he coached underneath me. I want to thank my dad, Nic Kennedy. He helped me with the mental process of the game. Not getting down on myself and always staying positive. My wife, Meighan Kennedy. She was always there for me, through the winning and the losing. But without those people, I wouldn’t have been as successful as I was this season. Without them, it would’ve taken a little longer to fix.”