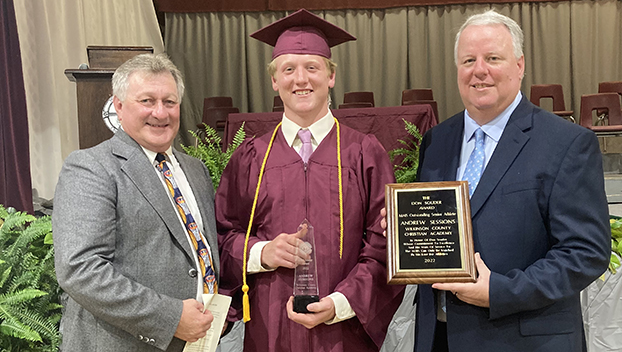 WOODVILLE — Wilkinson County Christian Academy graduate Andrew Sessions received a special honor this weekend. He earned the MAIS Don Souder Award given to the best male and female athlete in the Mississippi Association of Independent Schools.

He was presented the award by Chris Chance, MAIS Athletics Associate, at WCCA’s graduation ceremony Friday. Souder was the director of the MAIS for 24 years from 1969 to 2003.

Sessions won the 2021 All-Metro Football Player of the Year from The Natchez Democrat, the MAIS 1A District 3 Football Most Valuable Offensive Player of the Year and MAIS 3A District 4 Basketball Most Valuable Player. He was named to the MAIS 3A South State All-Tournament team and played in the Magnolia State All-Star Basketball game. In his basketball career, he accumulated 1,227 points.