NATCHEZ — Sentencing for Jessica Aldridge, 34, accused of gunning down her boyfriend, is set for Friday at 1 p.m. in Judge Forrest A. “Al” Johnson Jr.’s Sixth Circuit Courtroom at the Adams County Courthouse.

Johnson is filling in temporarily for Judge Lillie Blackmon Sanders, who is out on medical leave. 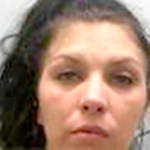 Jessica Renee Aldridge, 34, entered an open plea to manslaughter and felon in possession of a firearm. (Democrat file photo)

Aldridge made an unexpected open plea in April to manslaughter and possession of a firearm by a felon. An open plea means she does not have any type of deal for a specific sentence as a result of the plea.

According to law enforcement records, Cupit was found lying by his vehicle by the roadway outside the home. At the time, Aldridge told deputies she and Cupit got into a heated argument and that Cupit choked her.

Adams County Sheriff Travis Patten said at the time the victim was trying to leave the residence and was trying to get into his vehicle. Eyewitnesses allegedly corroborated the verbal dispute, but not the physical aspects, including the choking. Witnesses told deputies Aldridge fired the shots from the residence.

During her time in jail, Aldridge got pregnant and was released on several occasions on house arrest, only to violate the terms of her release. She is back in the Adams County Jail, awaiting sentencing.

SCHOOL BOARD: We have no intention of abandoning Robert…