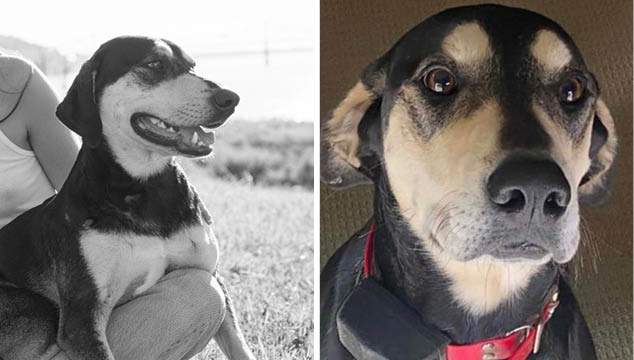 Bobby was either lost or stolen from the area of Magnolia Casino and may have been taken to the Dollar General on U.S. 61 North, near Tractor Supply. His family is offering a generous reward for his safe return. Please call 917-743-0188 if you have information. (Submitted photos)

The first of May, the batteries on Bobby’s invisible fence collar had run out of juice, and as most dogs would, Bobby set out on a stroll, making his way from his home at Magnolia Vale the short distance to Magnolia Bluff Casino.

That’s where the mystery begins.

The Kocheys worked with the Adams County Sheriff’s Office and obtained a subpoena for Magnolia Bluff’s security camera footage in hope of finding whether Bobby had been there. The casino’s video did indeed show Bobby and the woman who took him.

“He wandered from Magnolia Vale to the casino and we see this woman on tape taking his collar off and putting a leash on him,” Kochey said. “She’s talking to the security guy there and said to him, ‘I’m a vet tech.’ They said he was a stray, but he did not look like a stray. He’s this very healthy-looking, big strong dog wearing an expensive collar. She told the guy she was going to take him to the Humane Society or something like that.”

The sheriff’s department used the video to locate the woman in Illinois, but for legal reasons, a sheriff’s investigator told Kochey she could not share the woman’s name or address with him.

However, the investigator told Kochey she had been in contact with the woman and that the woman told her she left the dog in Natchez near the Dollar General on U.S. 61 North.

“She told the investigator she drove out 61 and let the dog out because she thought he needed to use the bathroom, but said he would not get back in the car with her, so she left him there,” Kochey said.

The woman allegedly told the investigator she was here for a wedding and ‘thought she was doing the right thing’ in taking Bobby.”

The sheriff’s investigator did not return a phone call Tuesday seeking more information at press time.

Since that time, the woman sent Bobby’s collar back to the sheriff’s office for it to be returned to the Kocheys.

The Kocheys continue to desperately search Natchez for Bobby. They have put up flyers, put the word out consistently on social media and have responded to numerous reports of sighting, all to no avail.

The family is offering offering a generous reward to anyone who will lead them to Bobby.

“It just doesn’t make a lot of sense to me since he was in very good health and obviously not a stray, taking him from where you found him and dropping him off 10 miles away. And she had a leash on him. Why would you let him out of the car without a leash?” Kochey asked.

“Our two kids are devastated. Bobby is our family’s loved pet. We have Bobby’s sibling, too. This is just not right,” he said.

If you have information about Bobby or his whereabouts, please contact Kochey at 917-743-0188.