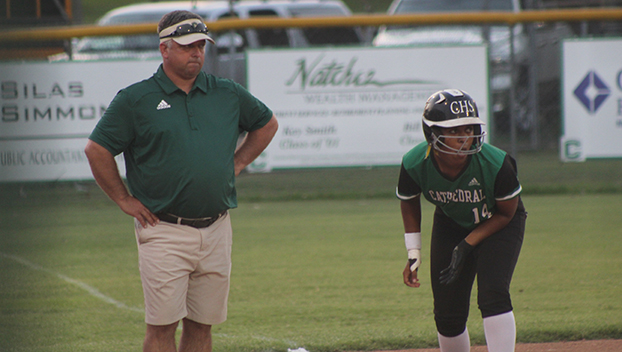 NATCHEZ — Lauren Dunbar suffered two ACL injuries to her knees in 2017 and 2020, which took her out of her junior year. A strong player, she overcame those injuries and took to the field her senior season.

The Green Wave shortstop who graduates Friday was a key player to the team’s success. For the first time in Cathedral’s time in the MAIS, she helped them win a district title and go far into the state tournament.

She is a laser focused, competitive and driven player. Strictly business, she showed unbridled joy when the Green Wave won its district title. Her smile beamed across her face. It is her efforts as a veteran of the team and taking them deep into the playoffs that earn her the 2022 All-Metro Softball Player of the Year.

“It is one of those things you work up to. One of my friends got it last year; it is good to be up there,” Dunbar said. “We worked for five years up until the big moment this season. We clicked together in order to get to a district championship.”

Cathedral’s squad featured experienced players like Dunbar, Cate Drane, Gracie Hargill and also young players like Kinslee Young and Lilly Crum. The players got along and it carried them deep into the postseason.

Dunbar enjoyed watching the younger players grow over the season as they mature. She said the ninth-grade team will likely win another district championship before they graduate.

This season she stayed injury free and at the top of her game. Dunbar had a .481 batting average with 37 hits, 3 home runs, 14 doubles, 40 RBIs and a .939 fielding percentage as shortstop. She was selected to the MAIS District 3-5A All-District Team, MAIS All-Star game and MAIS All-State Team Member.

When she first started playing travel softball, Kennard Williams pushed her to be her best. She said she is not sure she would be where she is today without him. Her driving motivation is to constantly improve.

When the fall softball season ended, she was selected to play in the MAIS All-Star game. Going into college, she knows she will likely see some familiar faces from the All-Star game.

Her time at Cathedral ended Friday as she graduated. She said she will miss the faculty and head coach Craig Beesley who was helpful on the field and in the classroom. She will miss the friends she has seen for 15 years.

College softball is next on the horizon as she reports to practice in August at East Central Community College in Decatur. She said already she has been added to the softball team group chat and has plans to work on her hitting, fielding and throwing over the summer.

She said she will have to be ready physically. One of the girls on the East Central softball team told her she needs to run an eight minute mile when she arrives. It is a bit of a daunting task for Dunbar who has only played softball and basketball.

Over the summer she will play softball with a travel team in Texas called Sneaky Cleats. Then it is on to her freshman year.

“I feel like it will be a challenge. There will be new routines and you will have new workouts,” Dunbar said. “When you add school, I’ll be prioritizing things. I have to make sure I get my stuff done, which I get my stuff done already.”

‘All the credit goes to the kids,’ Beesley guided…