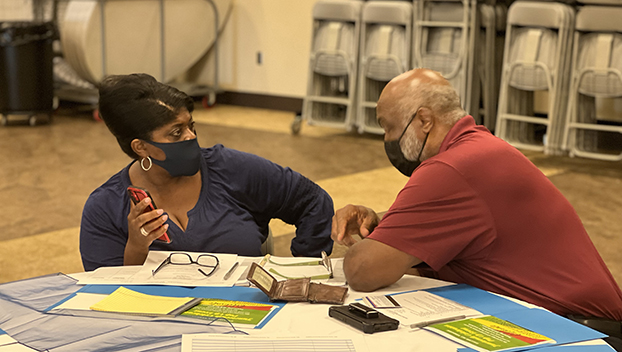 NATCHEZ — The Natchez NAACP branch is taking a multi-level approach to addressing poverty and sub-standard housing in the community, and the group is asking city and county boards to support those efforts financially.

The local NAACP leaders want both the City of Natchez and the Adams County Supervisors to supplement funding for federal housing assistance programs, particularly the SNAP program.

In December, Joyce Arceneaux-Mathis, who is the branch president, presented plans to the Adams County Board of Supervisors, the Natchez Board of Aldermen, and the Natchez Adams School District that would require their support – either financially or with in-kind services.

The NAACP then invited each of the boards and other public entities to a collaborative meeting at the Louis Gunning Safe Room this week, and during that meeting, Mathis asked local governments to budget to help those who meet the guidelines of the Mississippi ALICE report.

“ALICE” stands for “Asset Limited, Income Constrained and Employed” and refers to individuals who do not meet the income criteria to benefit from programs such as the Affordable Housing Project (AHP) or Special Needs Assistance Program (SNAP) sponsored by the Federal Home Loan Bank of Dallas.

“ALICE is having a problem,” Mathis said to officials on Wednesday.

Since 2013, the City of Natchez has partnered with local banks each year to participate in the SNAP program. The program has helped make over $640,000 worth of worth of home improvements and repairs in the Natchez community. Eligible repairs made in the past have included replacing a worn roof, electrical and plumbing repairs, ADA upgrades and replacing non-compliant open flame heaters.

However, the program is capped with approximately 20 applicants selected for assistance each year. They must also fall within a low-income bracket based on their household size to qualify. The applications are typically picked up and returned to the Department of Planning & Community Development at Natchez City Hall, and reviewed on a first-come, first-received basis.

Mathis asked each of the Board of Supervisors and Board of Aldermen to consider giving $50,000 each from their annual budgets to help citizens who are just above the federal poverty level but still struggling financially.

“The NAACP is not asking for you to give us any money,” she said, explaining that the money would go to the program, not the NAACP, for distribution. “What we’re asking for is it to be included when you all do your annual budgets.”