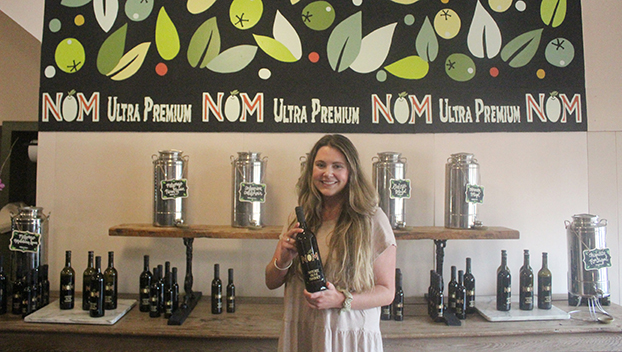 Sarah Beth Willard is a co-owner of the Natchez Olive Market. She joined forces with Liza Sharp in October to open the business located on Franklin Street close to where The Dart landed. Willard has an expertise in marketing. (Hunter Cloud | The Natchez Democrat)

NATCHEZ — Natchezian Sarah Beth Willard is living her dream. She is working with Liza Sharp to run a brick and mortar storefront on Franklin Street close to where The Dart landed this week.

The business is called Natchez Olive Market, or NOM for short, and is just a month old. It’s the first storefront for Willard, who also owns and operates Natchez Grazing Company.

Through the partnership and storefront, the two women bring their culinary backgrounds to the fore, providing a wide variety of gourmet ingredients, creating charcuterie boards and help sell 46 different olive oils and balsamic vinegars.

A Cathedral graduate, Willard studied marketing and fashion at Louisiana State University. After graduating in 2017, she returned home to work for the Chamber of Commerce and First Natchez Radio Group, now Listen Up Y’all, under Margaret Perkins.

“I chose to go into marketing because I was into the graphics and artistic side. My grandmother was super artistic and I knew LSU had a good marketing program,” Willard said. “In a small town, it is hard to find a good marketing job. It gave me a boost to promote and use social media.”

Now, she uses those same skills to promote her own business “Liza and I work well together. Our social media strategy is so important,” Willard said.

The store provides gourmet foods people would have had to drive to Baton Rouge or New Orleans to find. Currently, they sell a cheese made at a creamery in New York that is not sold anywhere else in the Southeast, she said.

Sharp brings 20 years of experience working with olive oils and balsamics into the business relationship, Willard said.Together they brainstormed the name Natchez Olive Market so it would include Natchez in the name. The initials NOM, a word used for expressing pleasure in eating, are a play on words and an olive is where the “o” should be.

Her spare time away from the shop is spent traveling, going to the lake, hanging out with friends and family in addition to cooking. Bethany Lambdin Overton, her grandmother, was an amazing cook and helped Willard get started in the kitchen.

“I grew up cooking. Any time my grandmother and mother were in the kitchen I was right there cooking with them,” Willard said. “It brings me peace. I can use all of the gourmet products we

sell here that I couldn’t have used in the past. I cook a variety of different foods.”

Willard also is passionate about her dogs: an English Springer Spaniel named Piper and a mutt named Baby.

“I was working as a personal chef for the movie producers who were in town out in Church Hill. I left work one day and saw Baby on the side of the road,” Willard said. “She was hungry. I couldn’t resist because she had the sweetest eyes so I took her home with me.”

UPDATE: Man authorities say was shot while attempting to…