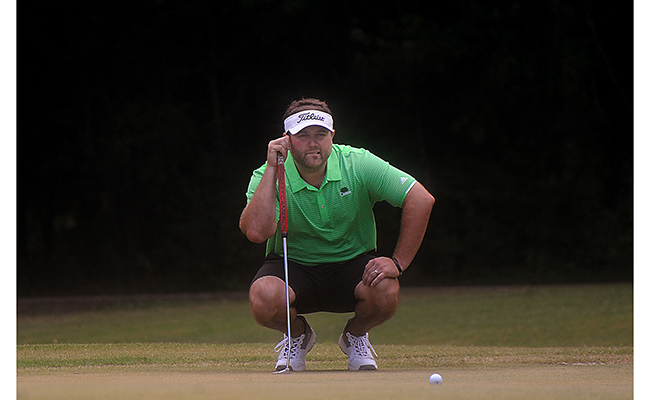 Beau Pré has a new champion. Jordan Farmer shot nine under to capture the title and mounted a three stroke comeback to overtake Casey Ham in the final day. He won a plaque and the best parking spot at the golf course. (File Photo)

But the multi-time champion of this event went on a birdie binge last Sunday afternoon and no one was going to catch him — not even Ham, the first-round leader.

Farmer, who was not able to defend his title last year, shot a blistering final-round 8-under-par 64 to finish with a two-day score of 9-under-par 135 and finish with a stunning five-shot win over Ham in the championship flight of the open division.

“It was a good day. I finally got some putts to go in. I hit the ball well on Saturday. I just couldn’t get any putts to fall,” Farmer said. “I figured Casey and Griffin and Christopher would have another good round. Unfortunately for them, they didn’t have a good round and I was able to catch up.”

Farmer said he was not surprised about his round on Sunday. He added that he was glad it happened when it did. He had nine birdies and one bogey on No. 14 after missing a short putt for par.

After shooting an opening-round 4-under-par 68 on Saturday to take a one-shot lead over both Griffin Agent and Dr. Chris Martin, Ham surprisingly struggled during Sunday’s final round and ended up shooting an even-par 72 to finish second at 4-under-par 140.

Both Agent and Martin, who had rounds of 3-under-par 69 on Saturday, had final-round scores of 76 to finish out of the top three with two-day totals of 145.

“It was surprising (that they struggled). The course wasn’t playing that tough,” Farmer said. “There were birdies to be made. The course was set up to make birdies.

Chase Kaiser ended up in third place in the championship flight with rounds of 70 and 71 for a two-day total of 3-under-par 141.

Bubba Kaiser rallied from a two-shot deficit after Saturday’s first round to win the first flight thanks to a final-round of 2-under-par 70 to finish at 146 — just one shot ahead of Lloyd Trisler, Tom Bryant, and Joe Willis, who each had two-day totals of 147. Trisler had rounds of 75 and 72 while Bryant and Willis each had rounds of 76 and 71.

Paul Guido won the championship flight of the senior division thanks to rounds of 71 and 70 for a two-day score of 3-under-par 141. Second place in that flight went to Al Guido, who had rounds of 75 and 73 to finish at 4-over-par 148.

Greg Brooking and Adrian Stallone finished in a tie for third place in the championship flight with two-day scores of 5-over-par 149. Brooking shot rounds of 74 and 75 while Stallone fired rounds of 75 and 74.