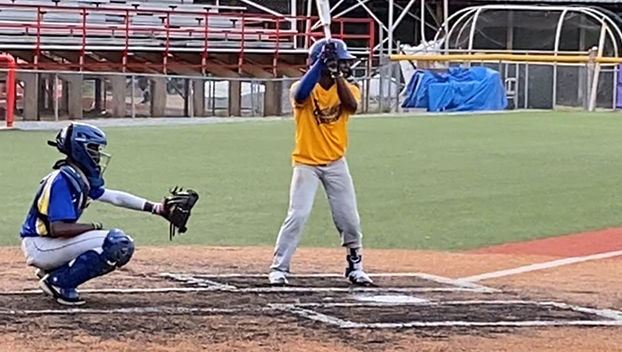 Jaylin Davis stands in the batters box at the Hank Aaron Baseball League. He told Natchez Head Coach Dan Smith he was happy he was lifting weights this summer because he feels a lot stronger. (Courtesy Photo | Bulldog Athletics)

NATCHEZ — Head Coach Dan Smith’s Natchez Bulldogs are working hard this summer and having fun while doing it. He said his returning players are playing in the Hank Aaron Baseball League this summer.

It is a great opportunity for the players to spend time on the baseball field and work on their game. The Hank Aaron Summer Baseball League is played at Hank Aaron Field in Jackson where the Jackson Generals and Jackson Mets once played.

Canton, Yazoo City, Murah, Crystal Springs, Forest Hill and Jim Hill are playing in the league with Natchez. Smith said the games are competitive but also allow kids to work on their technique.

“You work on your technique and you don’t have to rush. You can break everyone down and fine-tune them,” Smith said. “We are going to Jackson to give the kids a different look. Smith-Willis Field is turf … College coaches are there looking at them. It is a good chance to play a different caliber.”

While most summer leagues are purely recreational, Smith said this one offers something more. “We know with this league they will take things more seriously.”

Natchez plays games on Tuesdays and Thursdays throughout the month of June. An end of the season tournament is the weekend after July 4.

Additionally, the league offers tryouts for its travel league team, the Fantastic 44. Tryouts include clinics with college coaches and selections will be made this weekend.

In addition to the league work, many of his players also have football workouts in the morning, and the combined efforts are resulting in a growth in arm strength and hitting power.

“Yesterday my shortstop Martavis Woods, we call him Pinky, was fielding the ball and throwing it across the diamond and he is only an eighth-grader,” Smith said. “I could tell the difference from the end of baseball season to now. Jaylin Davis told me he was happy we had him lifting (weights). He is throwing well and the weights have helped a lot.”

The Diamond Dogs have always lifted weights in the summer. Smith said it gives them experience and confidence.

“We are really young so I want us to get stronger,” he said.