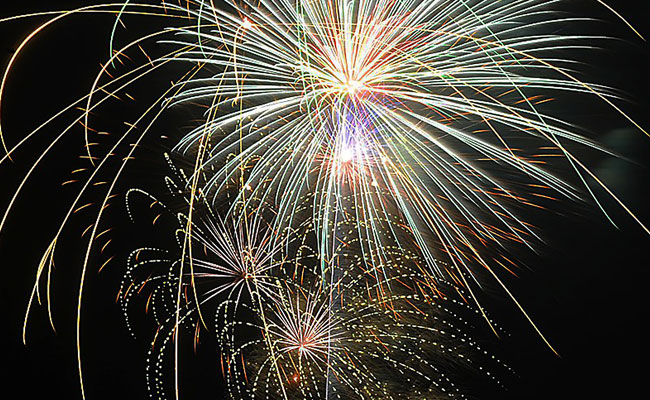 FILE PHOTO — The Fourth of July weekend will be filled with festivities including the annual fireworks over the river Monday and the Lake St. John Flotilla Saturday.

NATCHEZ — From Lake St John to the Vidalia riverfront and the Natchez Bluff, the Miss-Lou region is set up for weekend-long 4th of July festivities of community traditions, fireworks and music.

Saturday’s forecast includes a 50% chance of rain, but clear skies are expected Sunday in time for the band Alabama, featured in the Musicians Hall of Fame, to perform.

“Everybody is excited,” he said. “The weather is looking like Sunday is going to be great with a little break in the temperature.”

Sunday’s big show is preceded by the annual Flotilla, a boat parade on Lake St. John in Ferriday, Louisiana, and other Independence Day traditions. The celebration concludes with a bang at 9:30 p.m. Monday, July 4, with the annual fireworks display on the Mississippi River.

While it’s known for its competition boat parade and themed decorations, Susan Harris, Chairman of the Flotilla Committee said the tradition is fundamentally about “blessing the fleet for a safe boating season.”

A priest performs this blessing from the Steckler family pier, while onlookers and judges gather on the other piers around the lake.

The event is hosted by Spokane Resort at 4269 State Rte 568, where visitors may watch from a grassy null or public pier.

Boater registration costs $15 and begins the day of, July 2, from 10 a.m. to 12 p.m. Along with the Flotilla category, people may enter a pier decoration category. Each is judged based on creativity, time spent and originality. Themes don’t need to be patriotic, Harris said.

The overall winner prize, out of the top four in the Flotilla category, is $2500. In the pier decoration category, prize money is set at $500.

After the parade and winners are announced, the private pier of the family of Newt Willis will launch a firework show at dusk. From anywhere on the lake, and any pier, Harris said they will be visible.

July 2 and 3, Ardenland entertainment and Crooked Letter Pictures organized the second annual Natchez Fourth of July Celebration to take place on the bluff.

Gates open at 1 p.m. on Saturday and performances begin at 2:30 p.m. Following the opening act by the B3, there will be performances by Brit Taylor, Grayson Capps, Paul Thorn, at Robert Earl Keen for the closing act at 9 p.m.

The second day of performances on July 3 begins at 3 p.m. with Will Wesley. Following him are Drew Parker and Alabama at 6:15 p.m.

Local vendors and drink stands will be serving throughout the festival, and outside drinks will not be permitted. Tickets are $40 per day and can be purchased through www.ardenland.net/natchez4thofjuly.

Sratton W. Hall, who works with Crooked Letter, said guests will be able to park at the Natchez Visitor Center to catch a shuttle ride to the concert area. Other public parking is available within walking distance in the Downtown area, she said.

Sabrina Doré, organizer of the traditional fireworks display on the Mississippi River at Natchez and Vidalia, hopes for a 15-minute show beginning at 9:30 p.m. on July 4.

It might have to be cut 5 minutes short, though, if she can’t rally enough business donations in time.

“I know that the businesses are going to come through for the community, we just need a big wave of sponsors,” Doré said.

The only year in her 40 years of living in Vidalia that there hasn’t been a fireworks show on July 4 was in 2017. That was when Doré began to take the lead on fundraising for it, and generous local business owners and individuals come through. Each year she wanders through the crowds in Vidalia and Natchez gathered for the show.

“From the smallest child to the wisest citizen,” Doré said, “everyone just loves to see the sky light up.”

There’s no bad place to watch, she said. The barge is in the middle of the river, and the fireworks go high enough that anywhere on the Natchez bluffs and anywhere along the Vidalia riverfront, the show will be a spectacle.

The show is put on by Curtis Elkins, of Pyromania Fireworks LLC, who utilizes computer software to maximize economic efficiency and the novelty of patterns. He also organizes insurance and Coast Guard permits to prevent boat traffic during the show.

Terral Riverservice Inc launches the barge and navigates the currents during the show so that the barge is best positioned in the middle of the river.