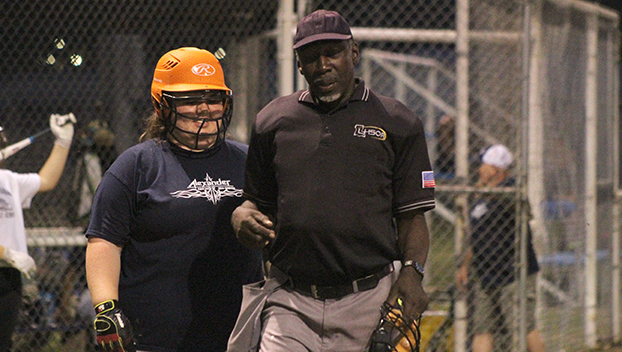 Natchez-Adams Softball League scholarship winner Taelor Magee chats with an umpire during last year’s league when she was on the Alexander Body Shop League. (Hunter Cloud | The Natchez Democrat)

NATCHEZ — Brooke Collier knew there was a good chance she would win one of the scholarships at the Natchez-Adams Girls Softball League this year.

She has played softball since she was five and the scholarships are given to someone who has played every year in the league.

When her name was called at the closing ceremonies, she said she felt blessed. She was even happier when her close friends Taelor Magee and Rebecca Ratcliff won scholarships, too. Collier was awarded the Riana Flynn Memorial Scholarship. Flynn was a friend of Charmainge Passinger, Collier’s mom.

“I knew she was friends with my mom. I remember playing catch with my mom and her glove had Riana Flynn written on it,” Collier said. “I asked about who she was. It meant a lot to me to get it.”

Collier said it meant even more that her friends were awarded scholarships too. Collier will attend Mississippi State University and plans to study psychology and pre-law so she can go to law school.

Magee said she knew there were likely just two scholarships available. Her career in softball at the NAGSL started when she was five years old and it is something she has stuck with ever since.  It was a surprise to Magee that all three received a scholarship because she was expecting two of the three girls to get a scholarship.

“My scholarship means a lot because they didn’t choose two out of the three,” Magee said. “They added more money to the scholarships to let each of us have one. Mrs. Bridget (Wactor) and Mr. Tommy (Wactor) have been a special part of my life. They let me come play this sport that I love every year and they are the ones putting it on for us. It is their hard work that makes us able to play.”

Her next step is to attend the Copiah-Lincoln Community College this fall before transferring to the University of Southern Mississippi to study physical therapy. She was a football trainer and played basketball so she knows what she wants to do in college.

“This scholarship means a lot to me not only because of who I received it from, or who I received one from, but because this will help go forward and start my education to do what I love,” Magee said.

Ratcliff said she has played softball in the league since first grade when one of her teachers convinced her to give it a try. After the first season, she kept on playing because she enjoyed meeting other people from different schools and playing together.

They would come back each summer and play together. She said next summer she will miss playing in the league and with her friends.

She said when she won the scholarship she was surprised and did not know what to expect. Her heart was filled with gratitude as well.

“I have been there for many years and Mr. and Mrs. Wactor have worked hard so we could play. They mean a lot to me,” Ratcliff said.

Magee, Ratcliff and Collier have played with and against each other over the years. It has been a fun experience playing with them, she said.

Ratcliff is looking forward to her next chapter at the University of Southern Mississippi in the fall. Hattiesburg is a change from the small town feel of Natchez, she said. Her major will be social work.

“I enjoy working with kids,” Ratcliff said. “I want to be able to better work with them and better understand them.”