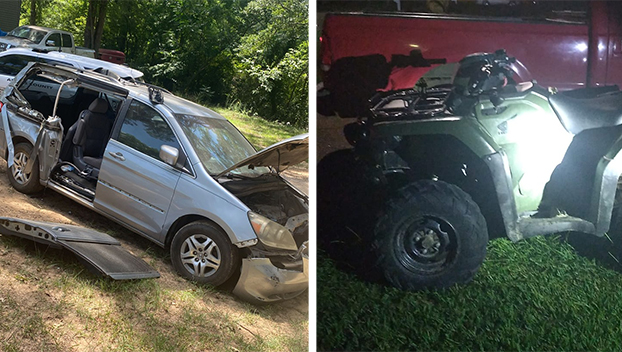 Adams County Sheriff's Office deputies recovered the van and four-wheeler pictured above during their weekend patrol duties. Both vehicles had been previously reported stolen. (Submitted photos)

NATCHEZ — During their weekend patrol, Adams County Sheriff’s deputies discovered a van and four-wheeler that were both reported stolen on separate occasions.

The four-wheeler was reportedly spotted by deputies with two males riding on it in the Morgantown Road area on Second Street last Friday.

When deputies attempted to approach the two, they both fled on foot and left the four-wheeler behind a house on Brooklyn Drive. When deputies located the four-wheeler, a blue Honda Rubicon, they noticed no key was used and they ran the VIN number to learn it had been reported stolen from a Wilkerson Road residence on June 23.

Deputies took possession of the four-wheeler and contacted the owner. The two who were riding the four-wheeler have been located and the case has been turned over to the Criminal Investigation Division, the sheriff’s office states.

The following Sunday, deputies were patrolling Fredrick Road in the Kingston area when they noticed a blue Honda van that was missing the back doors and other pieces.

The vehicle has been turned over to their Criminal Investigation Division.