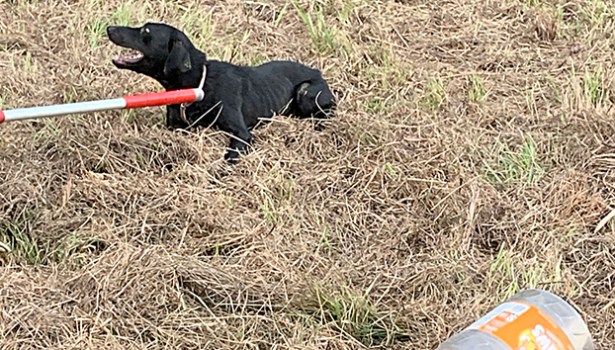 This dog was seen in the area of U.S. 61 north for about a week with a bucket covering its head. The dog was eventually caught and the bucket removed, but it escaped its captors. (Submitted | Karren Holland Ewing) 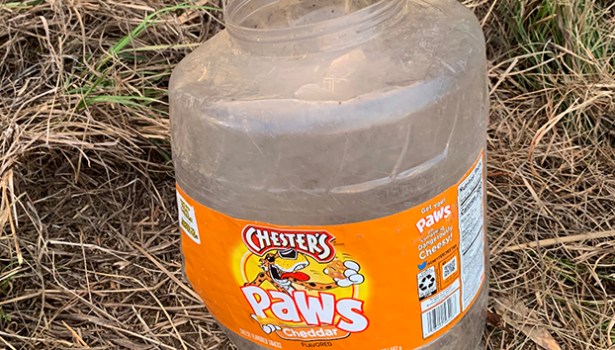 This Chester's PAWS Cheetos bucket was stuck on the dog's head for about a week. (Submitted | Karren Holland Ewing)

NATCHEZ — A number of travelers on U.S. 61 north of town near Atkins Lumber were witness to a frightening sight on Saturday.

They saw a black Labrador-looking dog crossing the highway with a bucket covering her head. Several residents stopped to try to help the dog, which ran away at each attempt to catch her.

Adams County Sheriff’s Deputy Karren Holland Ewing was contacted about the dog. Some who tried to catch the dog reported it looked like she had puppies somewhere.

On Sunday at about 5 p.m., Ewing was riding an area of Red Loop Road and approached a group of people who were standing and talking at a trailer park off that road. She stopped to talk to the group, asking if they had seen the dog.

“ ‘Yes, she’s right there. She’s my dad’s dog,’ one of them told me. She was right under the trailer, the bucket still on her head,” Ewing said.

They told Ewing the dog had the bucket stuck on its head for about a week.

Catching the dog was no easy task. Natchez dog lovers Jessi Knight Credle and her husband, Benjie Credle, and Linda Kennon and Johnny Kennon, joined Ewing, as did several deputies from the Adams County Sheriff’s Office.

The Credles, Kennons and Ewing are passionate about saving the lives of animals in need when such is possible.

When she was finally caught, Ewing said the dog was traumatized and “vicious.”

“We heard the dog hollering and knew they had gotten her. They had her out in a field on the catch pole,” she said. But that’s as close as anyone could get to her.

The deputies who caught her did manage to get the clear plastic bucket, which had one time held Cheetos, off of her head.

When the owner came to try to put a collar on her and tie her up, the dog almost bit him, Ewing said. They discussed putting the dog down then and there, but before that could happen, the dog slipped out of the loop around its neck at the end of the catch pole and took off. It hasn’t been seen since, she said.

The owner of the dog showed the escaped dog’s puppies to the group and said he didn’t want them and on Monday afternoon, signed a surrender form giving up the puppies.

Ewing and her crew met Monday and rounded up 11 puppies, which the Natchez-Adams Humane Society agreed to care for and put up for adoption when time to do so.

Ewing felt the dog would return to her puppies, but when they came to retrieve them on Monday afternoon, she was not there and no one had seen her.

“At least that bucket is off of her head. And there are lots of homes in this area. She is likely to find someplace where she can get food and water. We are going to continue to look for her and try to catch her. Hopefully, she will not be as scared and we will be able to catch her and get her spayed so she won’t have any more puppies,” Ewing said.

She thanked the Adams County Sheriff’s deputies who showed up and aided in the search and capture of the dog. They included: Deputy Aaron Wesley, Deputy Dizell Davis and Deputy Christopher Shropshire.

“We are so blessed to have the deputies we have. They are professionals and are animal lovers. They give of their time and are always there when I need help. This community is so fortunate to have Sheriff Travis Patten and the deputies who are at work at the Adams County Sheriff’s Office,” she said.