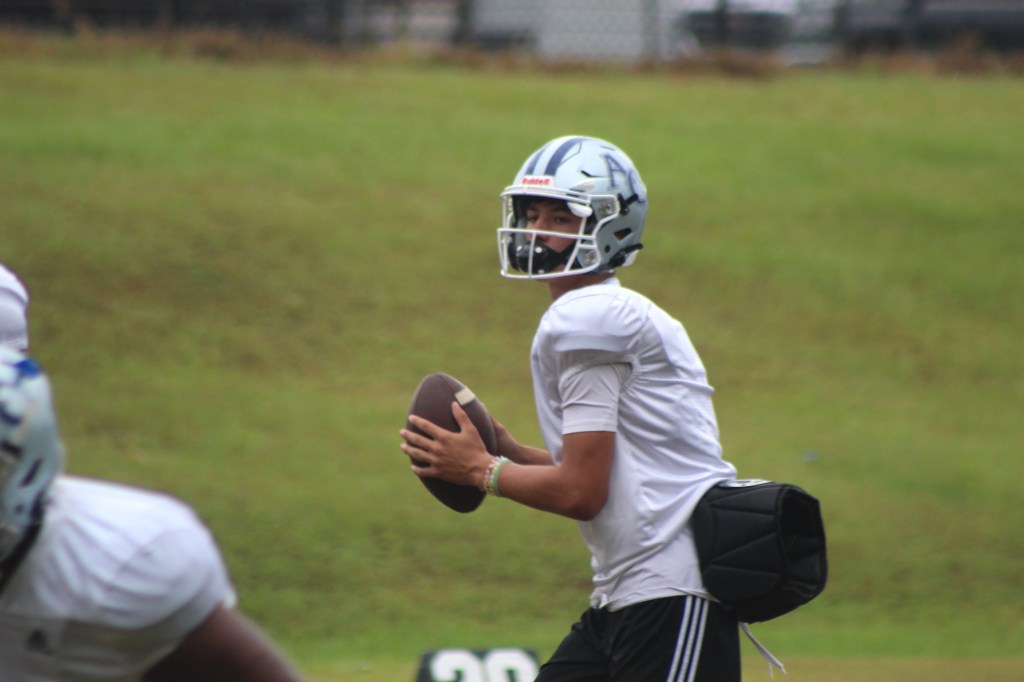 Coleman Carter looks to throw the ball in practice. The Rebels have some banged up players in the wide receiver positions. It will take a team effort for the Rebels to beat Tri County, David King said. (Hunter Cloud | The Natchez Democrat)

Carter completed 13 of 18 passes for 179 yards while rushing eight times for 26 yards. His touchdown passes of four yards to Samuel Merriett and 13 yards to Dantavios Stampley helped give ACCS a 13-0 halftime lead.

The Rebels increased their lead to 19-0 on Carter’s 22-yard touchdown pass to Jordan Berry nearly midway through the second quarter. But on a sloppy, wet field and with a new place-holder, Merriett missed two of his three extra points and an errant hold led to another kick not even happening.

Carter then threw a backward pass to Connor Aplin, who threw a pass under pressure to Jesse Grayson for an 11-yard touchdown with 10:51 left to give ACCS a stunning 25-0 lead.

But the Rebels recovered the ensuing onside kick. On 2nd-and-9 from the Yellow Jackets 49-yard line, Coleman threw a 28-yard pass for a key first down. Later in the drive, Carter kept the ball himself, ran around the right side and scored on a 21-yard run with 1:47 left.

Earlier in the second half, Grayson picked off a pass as Oak Forest was driving for a potential score. He also had a team-leading 10 tackles.

Kaleb Bailey had a pivotal fumble recovery for the Rebels near the end of the first half with the Yellow Jackets at the ACCS 1-yard line.

Berry finished with five carries for 63 yards and had three catches for 60 yards and one touchdown. Stampley had seven carries for 59 yards on offense as well as six tackles and one sack on defense. Both Aplin and Tristan Burns had five tackles apiece. Hayes Marchbanks had two catches for 35 yards.

ACCS (2-0) plays at Clinton Christian Academy next Friday with kickoff at 7 p.m.