Vision for the Basilica: Several restoration projects are underway at historic Natchez landmark 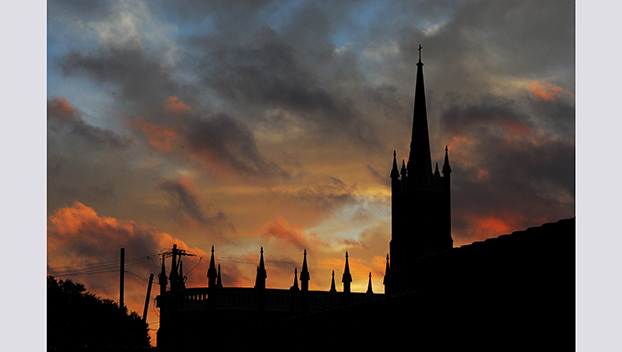 NATCHEZ — Many St. Mary Basilica parishioners are unaware of the concerning state of the third floor of the church’s rectory, Rev. Aaron Williams said.

Above the carefully maintained halls and offices of the rectory is an abandoned story that seems to have decayed over several decades. Parts of the ceiling are falling apart and deep cracks crawl up the walls. A space that formerly provided three bedrooms is now unsuitable for human habitation, Williams said.

The rectory has three stories and a basement that are as old as the church itself, he said. St. Mary Basilica was built between 1842 and 1886, taking more than 40 years to complete.

“The top story (of the rectory) historically had three bedrooms,” Williams said. “A lot of priests used to live there and it didn’t use to have an office which now the first floor has my office. I live on the second story and the third floor above me—I can’t estimate how long it has been since any kind of work has been done. I imagine it has been at least 50 years.”

Williams said the floor is not heated and cooled and is exposed to moisture from the outside. The building was designed so that heat could vent through open windows in the topmost story.

“If you close those, the whole house gets steamy so we have to leave them open, but moisture gets in so easily,” he said. “There’s a lot of moisture damage up there and a lot of plaster damage.”

Demolition work began on this floor this week so that it can be restored to usable condition.

Williams said the third story is being “gutted down to the studs” to address any issues.

“Instead of restoring all three rooms, we’d like to restore two and leave the third room as attic space for storage and have window units put in,” he said. “Even though there are no priests filling the house nowadays, with Natchez being a tourist city it’s not uncommon for priests to roll into Natchez and ask if they can stay. … I joke that I run a hotel out of my house. There’s always someone there. Having those rooms available would be great. We’d like to have that service for priests who come through town to have a place for them to stay.”

Concurrently, Williams said the church is restoring two stained glass windows that are starting to bulge and doing some restoration work in the church tower.

Williams said it was coincidental that, just as these projects were in ongoing, lightning struck the church and caused extensive damage to electrical equipment, including the church bell, the organ and the sound system, causing an immediate need to repair or replace older equipment.

Another plan for St. Mary is to build secure museum displays in the basement of the church for some of the artifacts hidden inside the church vault, such as books and artifacts from the 1800s and gifts given to the Basilica from popes over several generations.

The museum project has been in discussion for several years, long before Williams became rector, he said.

“We’re finally moving forward,” he said. “We’ve cleared out the room that is going to become the museum and now we’re at a point where we’re receiving proposals from contractors to actually do the work. My dream is within the year to at least begin that project.”

The church is visible to anyone who visits Natchez, Williams said, adding he wants those who visit to leave with a good impression of what is there.

“Especially with the two new boats coming to Natchez on top of the ones we already have, the basilica is a visible building and people come to it. We print 500 self-tour guide brochures every month and not everyone who visits takes one. We know that people come through all of the time. Anything we can do to expose people to what is there would be great.”

Those who want to learn more about St. Mary Basilica, or make contributions, can visit www.stmarybasilica.org.