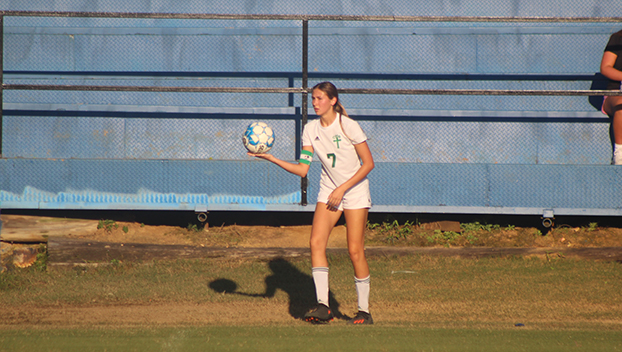 Maddie Verruchi scored a hattrick for Cathedral in a 4-1 win over ACCS. Here she is making a throw in against Brookhaven Academy this season. The Cougars won the district title while the Green Wave finished second. (Hunter Cloud | The Daily Leader)

With the win in the regular-season finale for both teams, the Lady Green Wave finished in second place in Division II South and will be the South No. 2 seed in the MAIS Division II Playoffs.

“They were ecstatic about beating ACCS,” Cathedral head coach Dennis Hogue said. “They knew the night before that they had clinched a spot in the playoffs. We had to play Oak Forest Monday night. Regardless with what happened against ACCS, they had already clinched a playoff berth.”

In the win over the Lady Rebels, Maddie Verucchi scored three goals while goalkeeper Mollie Foster had about eight saves.

“She was outstanding. She’s a really good goalkeeper,” Hogue said. She didn’t have that many saves because of the game plan we had defensively to keep them from having many chances. Mollie didn’t have to make that many saves, but the ones she made were crucial because they were right on target except for one. She’s a smart keeper.”

After the Lady Green Wave held on for a 2-1 over the Oak Forest Academy Lady Yellow Jackets last Monday night, they took pictures after the game because they knew they were in the playoffs, Hogue said.

“They finally got the monkey off their backs,” he added.

Cathedral finished the regular season with a 10-4 overall record and a 6-2 record in Division II South. They will be on the road to face Central No. 1 seed Lamar Academy in Meridian in a first-round match-up on Tuesday, Oct. 4 at either 5:30 p.m. or 6 p.m.