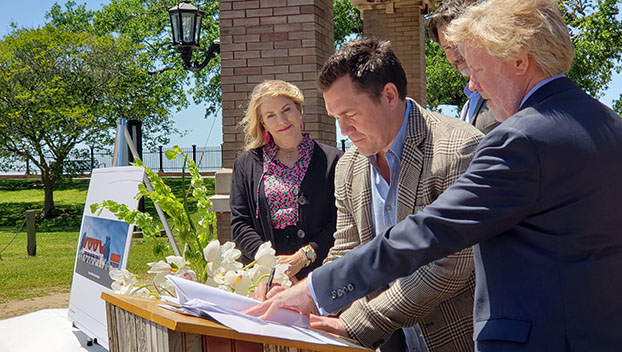 NATCHEZ — Film director Tate Taylor’s idea of developing a world-class restaurant in the historic Depot building on the bluff in Natchez is no more.

Instead, the aldermen voted to pursue grant funds to renovate part of the Depot, install restrooms and a visitor information area, and create a visitor film experience by developing a small theater. The remaining square footage, approximately 1,780 square feet, would be available for future development.

The Mayor and Board of Aldermen voted to dissolve its lease with Church Hill Variety, Taylor’s company, which had designs on creating a fine-dining restaurant in the Depot with an outdoor pavilion and amphitheater overlooking the Mississippi River.

Natchez Mayor Dan Gibson said Wednesday night, after an almost five-hour meeting of the Mayor and Board of Aldermen the numbers on the project just don’t work.

“We have, over the last few months run into some frustrations. And that is, it’s just the matter of math. When you are going to invest significant funds into a restaurant, you’ve got to make sure you can accommodate enough people and have enough business to recoup the investment and make a profit. It’s just simple economics,” he said.

The Depot is a small building, and it’s a historic landmark, which brings with it complications.

“In order to do what needs to be done, much work would have to take place that simply is not possible given the historic nature and protected status of the Depot. Everyone has tried and the Mississippi Department of Archives and History has tried, but ultimately, there just is not a plan that works financially for that building for the scale of restaurant envisioned by Church Hill Variety,” Gibson said.

However, all is not lost for Taylor and his company. He said Church Hill Variety plans to move the restaurant project to an adjacent parcel of property on the bluff that they own privately.

“It is the old parking lot that used to be the parking lot for the Callon Building,” he said.

The parking lot is exempt from the historic landmark district because it is privately owned, and its owners at the time the district was formed chose not to be a part of it.

“Under the state law, no one can landmark your property without your permission, and that permission was not granted,” Gibson said.

He praised Taylor and Norris for the investment they have made in Natchez.

“We are so excited, and we are just grateful. Just a couple of weeks ago, we got to meet Morgan Freeman and give him a key to the city, and that would never have happened had it not been for Tate Taylor, John Norris, and their group,” Gibson said. “Crooked Letter Pictures means so much to our community, and they have brought millions of dollars of investment to our community, numerous film productions and

not just the films you know, but docu-series, documentaries like Great Escapes that just wrapped season two for The History Channel. I just want to say with great excitement that we look forward to seeing what the next step is and what is to become to our beautiful bluff on that valuable property that is privately owned.

“There has been a rumor mill circulating, and let that rumor be quashed tonight. Tate Taylor is not going anywhere, and we are not going to let him because he and his production company mean too much to Natchez,” Gibson said.

On Dec. 10, 2019, Taylor and his partner, John Norris, presented the idea to city officials, who later agreed to begin negotiations on a lease agreement.

Then, the pandemic struck, and as with most everything, work on the project halted. However, by April 21, 2021, things seemed to be back on track, and the city and Taylor signed a lease agreement during a public celebration at the Depot. That lease gave Taylor 180 days to complete the project. The lease between the city and Church Hill Variety was extended at least once.

Aldermen voted unanimously to apply for $275,000 in grant funds from the Mississippi Department of Archives and History’s Historic Heritage Program. They voted to approve a 25 percent match of those funds.

“We have settled on a new strategy for the Depot,” Gibson said. “It is the board’s desire to very quickly complete the exterior restoration, which is almost complete except for the pavers that surround the building.

“The grant funds would provide for a way for us to have restrooms there in the depot, along with a small visitor reception area for visitor information only and to assist visitors who may be downtown looking for things to do and looking for information on where they can buy tickets or where they can catch the Hop On Hop Off bus or take a carriage ride. We also have a desire to create a visitor film experience in a small theater in the Depot.”

He said the majority building, approximately 1,780 square feet, would be available for future development through a Request For Proposals process.