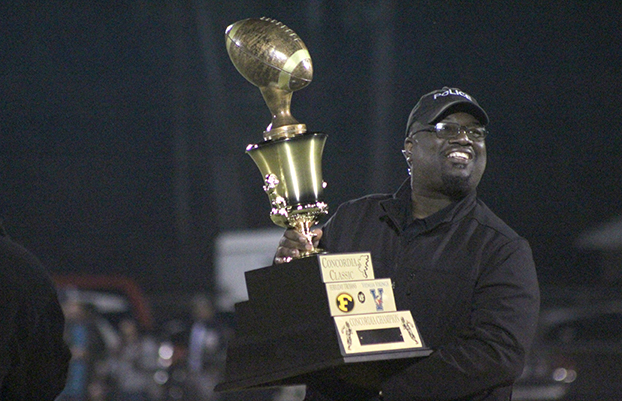 VIDALIA — As Vidalia High School head football coach Michael Norris said, in any rivalry game, you can basically throw out the records. But that will not be the case when the Vikings play host to Concordia Parish and LHSAA District 2-2A rival Ferriday High School Friday night.

Vidalia is 4-0 for the first time since 2017. That was also the last time the Vikings defeated Ferriday, a 20-12 triumph at Melz Field. Jeff Hancock was in his third and final year leading the Vikings while Stanley Smith was in his first year as head coach of the Trojans.

And Norris said a victory for Vidalia over its biggest rival would be huge for both him and his program.

Having an extra day to get ready for Ferriday also meant an extra day for the Vikings to, as Norris put it last Friday, “help us heal up” from any nagging injuries. He added that practice has been going quite well so far this week.

“The kids are focused. It’s Ferriday week,” Norris said. “We watch film. We determine what we need to combat what they’re doing on offense and defense and install the stuff that we need to work on this week.”

Even though Ferriday is 1-3 this season under head coach Cleothis Cummings III, who is in his first year in his second stint as the Trojans head coach after Smith’s surprising resignation after the 2021 season, Norris said after watching film, they could easily be 3-1 overall.

A win for Ferriday would be huge for the Trojans as far as the district standings are concerned. Being 2-0 in district play with games against the likes of Mangham High School, Rayville High School, and district newcomer Oak Grove High School would be big.

And while Cummings was thrilled with the energy Ferriday displayed in its win over Madison Parish, he said there are some things that need to be worked on in practice this week ahead of the Trojans’ game at Vidalia.

“We’ve working hard since the beginning of the season. We still made mistakes. That’s the things that we’re focusing on this week so we can keep the momentum going this week,” Cummings said.

And it was good that the Trojans finally got their first win of the season ahead of their rivalry game against Vidalia.

“We didn’t’ start out flat. We came out and did what we’re supposed to do,” Cummings said. “It came down to working on the little things.”

There some things about the Trojans on each side of the ball that do give Norris some concerns — most notably their speed.

“Offensively, speed. They have two guys in the backfield who are lightning quick. If we give them the edge or just a little space, they are tough to corral. Defensively, they fly to the football. We have to be fundamental or they could put us in some tough situations.

“They have speed all over the field. We have to make sure we contain that speed,” Norris said.

The Vikings also need to take better care of the football. Last Thursday night in their win over Buckeye, they turned the ball over four times. Norris said that the X-factor in the outcome of this rivalry game will be effort.

“I think the team that gets out and executes for four quarters” will come out victorious Friday night,” Norris said.

Cummings said that while last week’s win is “still kind of hanging around,” he added that his team still has to prepare for a good Vidalia team.

“It’s (also) a district game. We have to come out as far as execution and minimizing our penalties.” Cummings said. “Offensively, they have some pretty good athletes. They have some athletes who can make plays. We have to minimized what they do well. Defensively, it’s the same thing as their offense. They play both ways. Utilizing their athletes in the best areas. They do swarm to the ball. They tackle pretty decent.”

As to who on his team will need to step up in order for Vidalia to defeat Ferriday and remain undefeated, Norris gave this unique answer — “Just our dudes. The guys that are studs need to be studs. On offense and defense. Our dudes need to be dudes.”

Cummings said that X-factor in determining the outcome of this game will be time of possession.

Cummings noted that he’s looking for “big energy from all our guys” this Friday night, adding “We don’t look to just one guy. We’re going to make sure our machine is working the way it needs to.”

Norris added that he expects the atmosphere at Dee Faircloth Viking Stadium to be electric and exciting.

“We look for Dee Faircloth Stadium to be rocking,” Norris said.